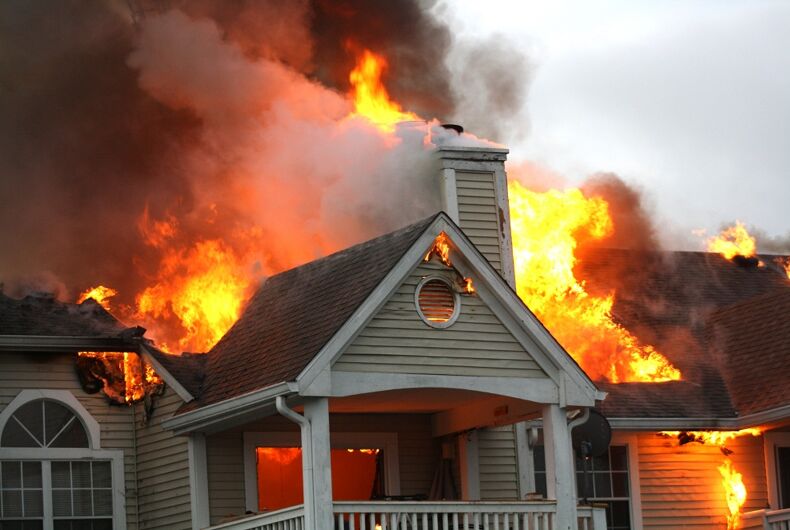 43-year old Lee Harrison has been sentenced to five years and ten months in jail for charges connected to a transphobia-fueled arson attack.

On August 15, 2019, Harrison of Sheffield, U.K. tried to pour gas through the victim’s mailbox and set the front door on fire, just a few days after telling her, “I’m going to burn you out.”

BBC reports that before setting the fire, Harrison regularly harassed the victim, a transgender woman. According to the prosecutor on the case, Robert Sandford, Harrison would deadname her in the street, and he also once told her, “Anyone who is a tr**ny offends me; it’s a lifestyle choice.”

On the night Harrison set the fire, a lock on the mailbox prevented the gas from getting through the door, and a neighbor was able to put out the fire before it spread.

The intended victim was not home when Harrison set the fire, but her roommate was there.

“I could not escape,” the roommate said. “I was trapped because the fire was coming from the front door and smoke was coming up the stairs. I truly believed I was about to die.”

The intended victim said, “I feel guilty that my best friend could have been killed because of someone trying to attack me.”

Harrison was sentenced by Judge Graham Reeds, who said he had put the lives of the apartment resident and the downstairs neighbors at risk.

“This was an offense aggravated by hostility towards the victim’s transgender identity,” Reeds said, “which is a very significant aggravating feature.”

In June 2019, the Guardian reported that anti-LGBTQ hate crimes have more than doubled across England and Wales in the past five years. The rise has been attributed to both an increase in reporting as well as the growth of right wing populism.