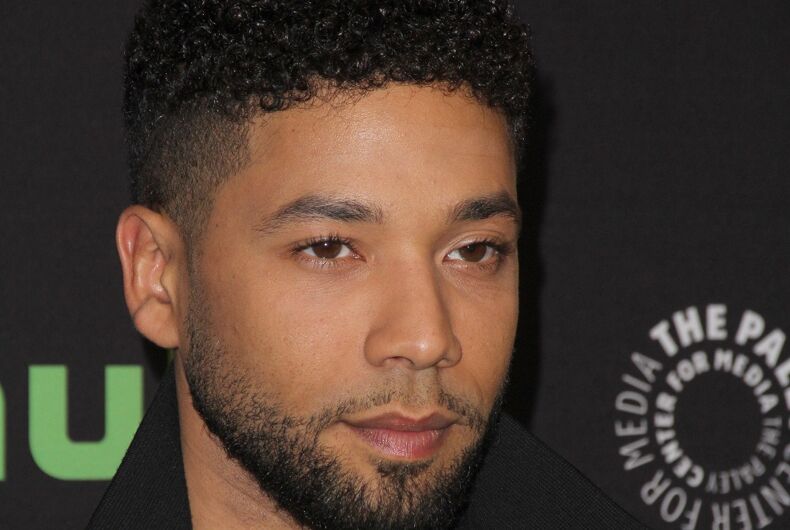 This week, a grand jury in Cook County, Illinois indicted actor Jussie Smollett on six felony charges of disorderly conduct related to his allegedly making four false reports to Chicago Police regarding a January 29, 2019 hate crime that prosecutors believe he carried out against himself.

Dan K. Webb, the special prosecutor appointed to the case in August 2019, announced that the Office of the Special Prosecutor decided to pursue charges against Smollett “in the interest of justice” due to “the extensive nature of Mr. Smollett’s false police reports, and the [$130,000 in] resources expended” by Chicago Police to investigate them.

Related: Jussie Smollett weighs in on 12-year-old girl who lied about being the victim of a hate crime

The out gay actor alleged that two men attacked him on January 29, 2019, pouring bleach on him and putting a noose around his neck while shouting, “This is MAGA country.” Two friends and gym buddies of Smollett – Ola and Abel Osundario – were caught carrying the rope and bleach on a security camera the night of the attack.

The Osundario brothers claimed that Smollett paid them $3500 to help stage the attack because he allegedly wanted a pay raise for his role in the Fox musical drama Empire.

Police arrested Smollett on February 21, 2019 on 16 counts of filing a false police report, but he pled “not guilty” and the charges were dismissed on March 28 with no explanation why since the court records explaining the decision were sealed.

Afterward, Smollett was asked to do 15 hours of community service and forfeit his $10,000 bail bond to repay the city for its investigation, though he admitted no wrongdoing.

Webb says the Cook County State’s Attorney’s Office – which dropped the charges – has provided no evidence to back up its claim that it dismissed the charges based on how similar cases were handled in the past.

In April 2019, Chicago police sued Smollett for $130,000 in investigation costs. In response, Smollett countersued the Chicago Police Department in November 2019 for “malicious prosecution, alleging that the brothers had lied to avoid prosecution and that police had no proof that his attack was a hoax. Smollett has reportedly subpoenaed documents related to the firing of Chicago’s former police superintendent Eddie Johnson in an attempt to discredit the police investigation against him.

The entire incident caused Smollett to be written out of Empire‘s final episodes in its sixth and final seasons despite the cast publicly advocating for his return. In the final episodes, his character’s mother said her son had “run off to Europe.”

A police officer was told to “tone down his gayness.” He just settled his suit for $10 million.