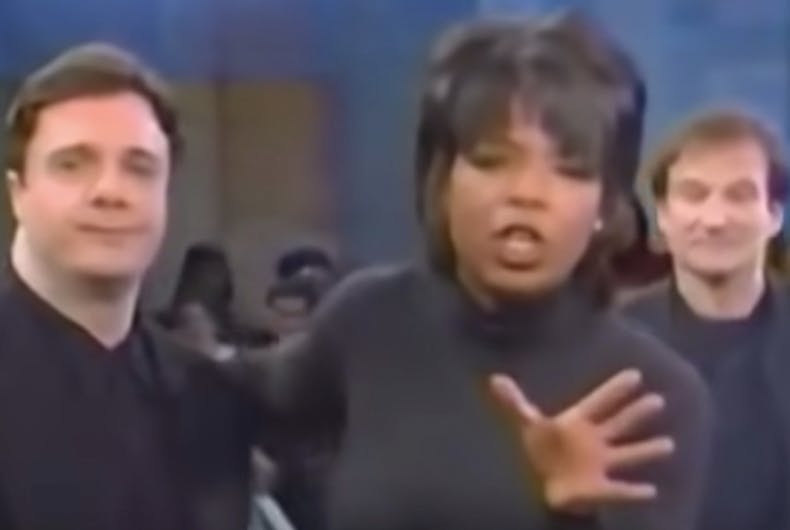 In a recent interview with The Hollywood Reporter‘s ‘It Happened in Hollywood’ podcast, 64-year-old gay actor Nathan Lane said he was terrified that he would be outed on The Oprah Winfrey Show.

Lane appeared on the show alongside Robin Williams to promote The Birdcage, their 1996 remake of the gay French comedy La Cage Aux Folles. Though Lane had been out to his family and friends in the New York theater scene since he was 21 and had acted in films since 1987, the success of The Birdcage made him world-famous, bringing with it some inevitable scrutiny of his sexual orientation.

“No one had been interested in my sex life up until then,” Lane told the podcast. “I finally get a nice role in a movie and I want it to be about the acting and not a coming out story — right or wrong, that was my decision.”

The scrutiny was understandable since in The Birdcage Lane plays the flamboyant role of Albert, a drag performer in love with a male nightclub owner. Later in the film, Albert masquerades as his adopted son’s mother just to appease his son’s fiancee’s ultra-conservative parents.

Though Lane wanted to avoid discussing his sexuality, his publicist warned it would likely come up during interviews, especially with Oprah. Lane says he told his publicist, “I’m not ready to discuss whether I’m gay or not with Oprah. I can barely deal with meeting Oprah, let alone telling her I’m gay.”

Around 15:56 in the interview below, Winfrey asked Lane if he was afraid that taking a gay role would typecast him for gay roles or make people question his sexuality for the rest of his career.

As Lane stammered, Williams deflected the question with humor, but Winfrey still followed up.

Lane responded, “Not really…. I don’t have an image to uphold. I’m basically a character actor. I’m not a sex symbol. From role to role I’m usually pretty different, and the material was so incredible, I don’t know how you could turn it down because you would be worrying about your image. It’s a wonderful character and very nurturing….”

The celebrity magazine Us later asked Lane point-blank, “Are you gay?” and Lane responded, “I’m 40, single, and I work a lot in the musical theater. You do the math. What do you need — flashcards?”

Lane officially came out in February 1999 following the murder of Matthew Shepard. He told The Hollywood Reporter that he had difficulty getting film roles after The Birdcage. His agent at the time, who was also gay, blamed Lane’s openness about his homosexuality.

Lane also said that he was one of the only gay people on set of The Birdcage and felt awkward about one line where his character said, “Alexander the Great was a fag.” When he expressed his discomfort with the slur to director Mike Nichols, Nichols replied, “Just do one for me.” Lane felt pressured to agree because he felt lucky just to be in the movie.

When Lane finally came out, “People were just annoyed that I came out. ‘Yeah, we already knew! Fuck you.’ So there was no winning there. It was all so intimidating. Honestly, I was terrified.”