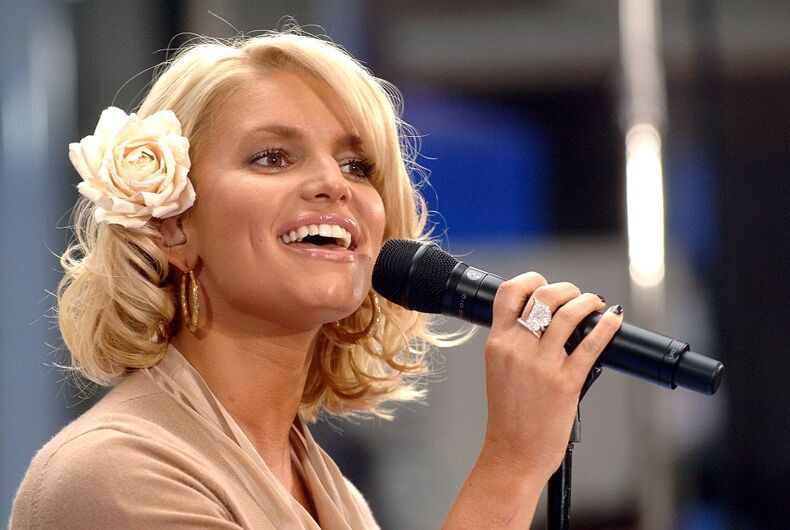 In a recent chat with talk show host Dr. Oz, singer and reality show celebrity Jessica Simpson revealed that her classmates taunted her with homophobic abuse after she confided to a friend that an older girl had sexually abused her throughout her childhood.

In discussing her new memoir, Open Book, Simpson said she was sexually abused by the older daughter of a family friend several times each year during sleepovers that occurred when Simpson was between the ages of five and 12.

Related: Brother of Aaron Hernandez says NFL player came out as gay to his mother before suicide

During these sleepovers, Simpson would sleep between her younger sister and the older girl to try and protect her sibling from being molested. “I would rather the pain happen to me than to my sister,” Simpson told Dr. Oz.

“I didn’t want to hurt [the abuser’s] family,” Simpson continued. “She was being abused as well, so I had compassion for her — I didn’t want to let the secret out. From a very young age, I was feeling sexual things that no kid should feel.”

She knew the abuse wasn’t normal, but she also felt a sense of religious shame because of its sexual nature. In junior high, she told one of her best friends what was happening. That friend later told “the whole school,” Simpson said.

Soon after, classmates began calling Simpson a lesbian — at the time, she didn’t know what that meant. Though Simpson was her school’s head cheerleader, she said several of her fellow cheerleaders encouraged members of a rival school to start chanting “lesbian” at her at a game. The incident compelled Simpson to quit the cheerleading squad and never cheerlead again.

She added, “It’s a painful thing to talk about and I’ve definitely risen above it.”

Because most of the abuse happened when she was asleep, Simpson said that she developed a self-protective fear of going to bed. For a while, she used alcohol to soothe her anxiety, but she found that it actually made it worse and inhibited her engagement as a parent to her own kids. She has since recovered from her alcoholism and hopes sharing her story might save lives.

“I truly had to find a place in my life where I had compassion for myself, and there are so many things about ourselves that we do keep private,” Simpson said. “I needed to face all those monsters and own it…. and I think not leading with perfectionism takes a lot of pressure off of anyone.”