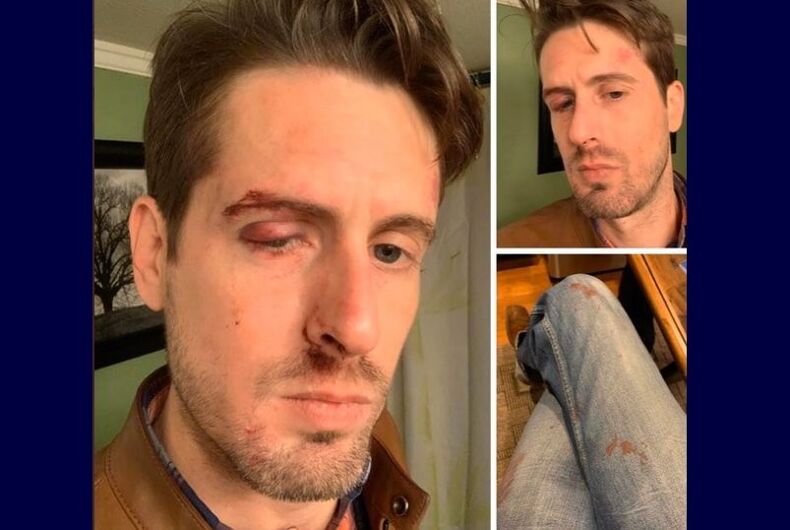 Social media post of a victim of the attack, injured after the attack at Liquid ZooPhoto: Screenshot/Twitter

An LGBTQ bar in Dallas was attacked by two men earlier this week, and police are looking for the two suspects.

The attack took place this past Sunday night after midnight at Liquid Zoo. Witnesses said that two young men entered the bar and shouted anti-gay slurs.

Bartenders tried to get them to leave, and that’s when they started punching the staff.

“It was kind of nightmarish because you never know what’s going to happen in that situation,” Ronnie Mikyles, who works at the bar, told CBS DFW. He added that he was worried that the attackers may have had a gun.

He said that he was knocked unconscious by one of the punches and he came to in the bathroom with a bar patron tending to his wounds.

“My face had gotten split open, and the back of my head was swollen on the right side of my face,” Mikyles said.

One victim who asked not to be identified posted on social media that he was at the bar at the time of the attack and said that he got punched by the assailants.

“A group of barely legal straights barged into our bar last night acting belligerent and when a few of the regulars stood up for the staff they beat us and fled,” he wrote. “I took the first punch. Several others have similar injuries. The main casualty is our safety in our own space.”

This happened to my friend last night at a gay bar in Dallas, Liquid Zoo 😡🤬 pic.twitter.com/coG4yUbeAM

Video from the bar’s security cameras show part of the attack.

Police have not been able to find the suspects yet, so Liquid Zoo posted images to Facebook, asking followers for information.

Hey Zoo Family..Here are a few images from our incident on Saturday Night…If you have anything that would be of help please get it to me asap. I'm meeting with detectives again tomorrow at 5pm.

Gary Welborn owns Liquid Zoo and he said that this is the first time something like this has happened there.

“You would think being 2020 we wouldn’t have that issue, but unfortunately, it’s bred into a lot of people,” Welborn said.

On its Facebook page, Liquid Zoo stressed that they are doing everything they can to prevent an attack like this in the future.

“We will not tolerate HATE against our bar,” they said.