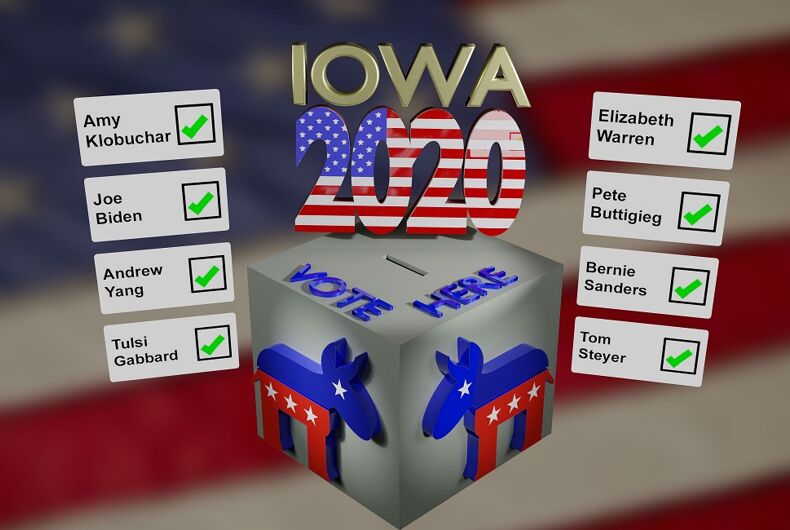 You know things are bad when Donald Trump is right.

On Monday night, the president tweeted that the failure of the Democratic Party to tally the results of the caucuses was an “unmitigated disaster.”

Related: Iowa Woman who voted for Pete Buttigieg was disgusted to find out he’s gay

Of course, Trump was acting in his role of Troll-in-Chief and used the opportunity to fan a crazy conspiracy theory, proving that he has learned a lot about election meddling from his friend Vladimir Putin.

But the fact remains that the failure to release the results was an unmitigated disaster. With more than three years to prepare, the Iowa Democratic Party – which is led by Troy Price, a gay man – decided to introduce technology that was insufficiently tested and just plain lousy. A backup hotline failed in the face of overwhelming volume. The upshot was that the party was scrambling to collect paper results from nearly 1,700 precincts across the state.

Unfortunately for Iowa’s status as the first-t0-vote state, the debacle calls into question why Iowa holds such a privileged position. For one thing, a state that is disproportionately white and older is hardly a snapshot of the Democratic Party.

The unrepresentative nature of the caucus system compounds the problem. To participate, you have to show up at a specific time, dedicate hours to the process, and publicly disclose who you support in front of your neighbors. Then if your candidate doesn’t hit a threshold, you have to decide who is your second choice. All the while, others are pressuring you to join their group.

No wonder turnout at the caucuses was low: about a quarter of the 700,000 registered Democrats in the state bothered to go.

Iowans have prided themselves on the process as an example of participatory democracy. But it is also inherently loose.

As a young reporter attending the caucuses in 1984, I watched as the nice caucus leader struggled to get an accurate count of who was participating and supporting which candidate. At one point, she just threw up her hands and decided that a candidate had “ten-ish” supporters. (It ultimately didn’t matter, because the candidate didn’t meet the threshold, but still.)

This year’s results will be irredeemably tainted, no matter how accurate they are. Pete Buttigieg took advantage of the confusion to declare himself the winner, even though he may not be. And why not? If the final results show otherwise, who will remember or even believe them? The news cycle has already moved on.

It’s time for Iowa to lose its status as the first to decide which candidates matter. It’s not just the Democrats that have screwed up. In 2012, Mitt Romney was declared the winner of the Iowa GOP caucuses, but it turned out upon closer analysis that the winner was actually Rick Santorum.

A growing chorus of voices is demanding that Iowa lose the privilege of going first. But the state will fight any challenge.

Besides the blow to its pride, there’s the money.  For example, Des Moines hotels rake in an additional $11 million in the week leading up to the caucuses. Then there are the businesses that profit from the campaign expenditures as well as the massive advertising.

Last month, an ad tracker estimated campaigns had spent $45 million on Iowa ads, a figure that no doubt went up substantially by yesterday.

The media’s ardor for horse race reporting has given Iowa outsized influence. The same could be said of New Hampshire, another small, disproportionately white state. For the nominating process to reflect reality, it’s time for a change.

In the meantime, the Democrats need to recover from this unforced error. It perpetuates a narrative of a party in disarray and uncertain about its direction. At a time when the focus should be on defeating Trump, the party is reeling from a disastrous start to its nominating process. As a gift to the president, the Democrats could hardly have done better.