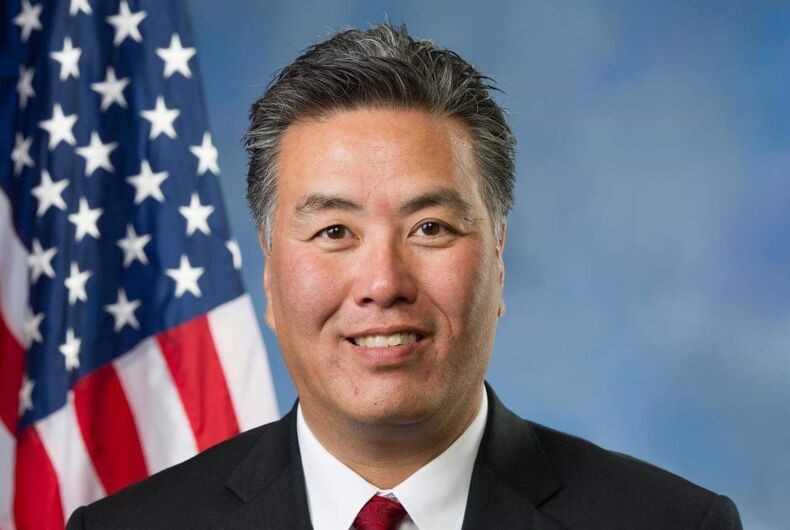 Representative Mark Takano is one of seven out members in the current House of Representatives. He has served California’s 41st District, covering mostly Riverside County, since its inception in 2013. Takano was also the first person of color that was openly gay upon his election to Congress, and now he is one of two in the legislature, alongside Native American Rep. Sharice Davids (D-KS).

Takano also co-chairs the LGBTQ Equality Caucus alongside the six other LGBTQ members of the House, which works with over 160 other members, and serves on the Committee on Education and the Workforce. Additionally, since last year, he has also served as the Chair of the House’s Veterans’ Affairs Committee – the first, and only LGBTQ Representative currently, to have the distinction of chairing a committee.

That’s a lot of communities and constituents that one person is expected to proudly represent, but Takano is up for the task. Topics of importance to him as of late have included ending conversion therapy, gun control legislation, and protecting Medical Care for All. He has also called for an official Congressional Office of Technology to deal with the modern issues of our time.

He spoke with LGBTQ Nation live at the 2020 Millennial Media Row, hosted by his fellow California Rep. Maxine Waters. “I have a gavel, just like Maxine,” he says about chairing the Veterans’ Affairs Committee, “and like Maxine, I know how to use it.”

I had the opportunity to talk with @DanReynolds from Imagine Dragons about the effort to end conversion therapy nationwide.

Dan is using his platform to shine light on the struggles LGBTQ youth face and spreading love and acceptance. I'm grateful for his work. #ImagineEquality pic.twitter.com/h91g5QYBrM

No child should EVER have to endure the immoral and dangerous practice of conversion therapy.

19 states have already banned this despicable practice, we owe it to #LGBTQ youth to ban it nationwide.#DefundConversionTherapy

Takano begins to speak on his experience working on the Committee, reminding us that “VA is the second largest department in the federal government – only second behind the Department of Defense.”

Speaking on the population he’s tasked with serving while acting as chair of the committee, the self-declared “Gaysian” talks about the uncertain population of LGBTQ people under his purview.  “The Veterans’ population is becoming more diverse, we know 15-20% of all service members are women…I can’t tell you an exact number of LGBTQ people, but there’s going to be more of them that are open, because 10 years ago, we overturned ‘Don’t Ask, Don’t Tell.'”

Takano remembers to point out, however, that trans people are not within that group. “They’re mistreating [trans people] in the army, and the navy, and the military…you know, don’t get me started on what this President said he was going to do for the LGBTQ community, and made it sound like he was an alright Republican.”

“He turned out to be someone who’s going to discriminate [and] promote discrimination against our community,” Takano says.

As a former teacher, Takano first tells us about how personally he takes Trump’s “undermining” of public schools, most effectively by allowing Betsy DeVos – “an enemy of public schools for most of her life” – to run the Department of Education. “This is not a good thing for minorities, and especially LGBTQ people!” Takano declared.

We ask Takano to explain to us what he plans to do for the remaining Congressional session, with up to a year left in the current administration. How does he hope to help the LGBTQ people under attack by Trump, DeVos, and so many others? What about Veterans and current military members? What can be done to support trans military veterans?

Takano answers, “I have a lot of legislative agenda that I want to achieve in terms of preventing suicide among veterans, that’s a whole agenda in itself…people who are most vulnerable to suicide are people who have been subjected to military sexual assault,” explaining that men are committing most sexual assaults against men within the military, although the sexual assaults against women happen at a much faster rate. “There are ways in which I think we need to reform our process, so that people who have been subjected to assault will come forward, and will report what has been done to them,” Takano says.

He also looks forward to pushing an agenda in order to protect student veterans that become targets “from predatory, for-profit schools…because of their generous veterans’ benefits.” He points out that “these aren’t specifically LGBTQ issues, but they are issues that affect all veterans, and actually, affect all students.”

What Takano believes is “the most important thing to do” is holding everyone accountable for better results. “Hold this administration accountable, hold the VA accountable, to serve veterans well – to make sure the VA is a welcoming and inclusive place.”

Specifically in regards to trans people, he says that the overall treatment of trans veterans has been positive, “as far as I can tell.” Alluding to the struggle in clear results caused by the Trump administration’s policies, Takano admits that “we need to make sure.”

“I just want all trans people to know that I’m here to listen to trans veterans, who need better access,” Takano promises. “The Veteran’s Health Administration treats veterans on a medical basis, they don’t – they’re not supposed to be discriminating, and as chairman, I’m going to keep it that way.”

In looking ahead to the next Presidential administration, Takano speaks on Pete Buttigieg’s success in becoming a ‘leading’ candidate (“I was going to say, ‘on top’, but that expression, in our community…” he trails off.)

“It’s amazing that an openly, gay, VETERAN is leading in Iowa,” Takano exlaims. He clarifies that he has “not gotten behind any candidate,” but he finds Buttigieg’s performance “remarkable.” Looking ahead to the upcoming New Hampshire caucus, Takano points out that Ann McLane Kuster – one of two Representatives of the state – has endorsed Buttigieg – “So 50% of the state,” essentially.

“I think [people saying], ‘Oh, I can’t believe the mayor of South Bend is gonna really get to the end’ – we don’t know that,” he says of Pete’s electability detractors. “…so, my congratulations to him, for representing our community, the LGBTQ community, and showing those LGBTQ teenagers across the country…'[you can] have worth in themselves, and you too, can run for President.'”

In his parting words, Takano urges Democratic voters across the country to get out and vote – “take these names down,” he requests – so something special can happen in Congress.

He names four candidates – Ritchie Torres, Georgette Gómez, Jon Hoadley, and Gina Ortiz Jones as “just a few LGBTQ [candidates]” of color that can be elected into Congress in the upcoming year.

According to Takano, here’s how the candidates shape up: Torres, running in New York’s 15th District, “could be the first Afro-Latino who’s gay to become a member of Congress.” Gomez would be “a[n out] Latina [from] San Diego” if elected, and Hoadley is a Victory Fund-rated ‘game changer’ that is “running out of Michigan”. Jones is a veteran vying to represent Texas’ 23rd Congressional District on her second attempt at the seat.

Takano actively wants to welcome these candidates to the House chambers, having even endorsed some of them. Why?

“Actually, I could start a whole new caucus,” he says. While he remains “the only Gaysian, still,” he says that along with Rep. Davids, they could form a subcaucus within the LGBT Equality Caucus that would represent LGBTQ people of color.

“That’s not only going to be LGBTQ diversity, but intersectional diversity, right? I think that’s very cool.”