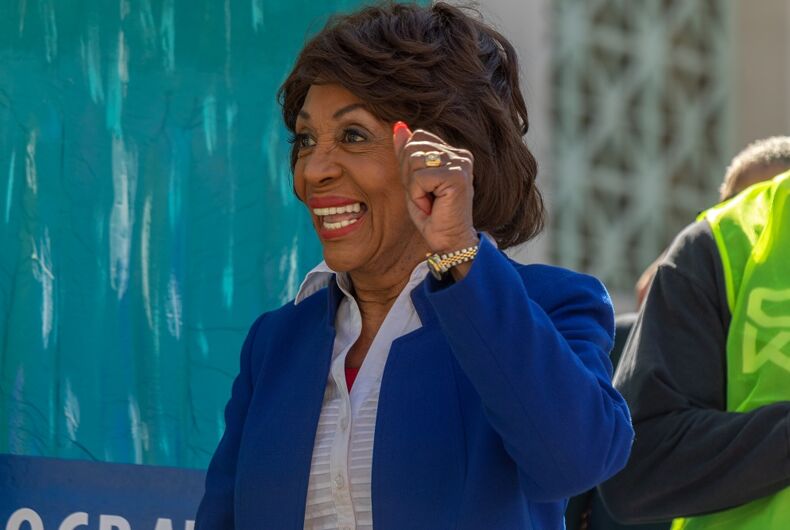 Rep. Maxine Waters (D-CA) had an encouraging message for Pete Buttigieg and LGBTQ people in general.

Speaking with LGBTQ Nation‘s Juwan Holmes at the Millennial Media Row event in Washington, D.C. last night during the State of the Union address, Waters admonished Donald Trump as racist and homophobic.

Related: People are remixing Maxine Waters’ ‘reclaiming my time’ & the results are glorious

“Given his whole topic of ‘making America great again,’ he really means putting his feet on our neck, and keeping us down, and keeping us from being real participants in this society,” she said, referring to how Trump has treated Black people and LGBTQ people.

“As a matter of fact, he has done everything he can to deny participation by the LGBTQ community,” she said, adding that it’s time to focus on the election.

“It looks like Mayor Pete is doing his thing in Iowa,” she said. “And that should be absolutely one of the most inspiring things that the LGBT community can ever hope for.”

She wasn’t endorsing Buttigieg; FiveThirtyEight‘s endorsement tracker says she hasn’t endorsed anyone in the 2020 Democratic primary. Waters was saying the fact that an LGBTQ person can get people to vote for him is a moment in history worth remembering.

“It shows how far we have come in dealing with LGBTQ issues,” she explained. “So I think that it’s a moment in history that will be recognized.”

Buttigieg made history by kissing his husband, Chasten, on-stage when announcing his candidacy as the first presidential candidate married to someone of the same sex.

He was also the first gay candidate to appear in a nationally televised debate, and he made history a second time by being the first candidate to discuss their personal coming out story in that debate.

The moment is here! Rep. Maxine Waters sits with LGBTQ NATION right before the #SOTU.