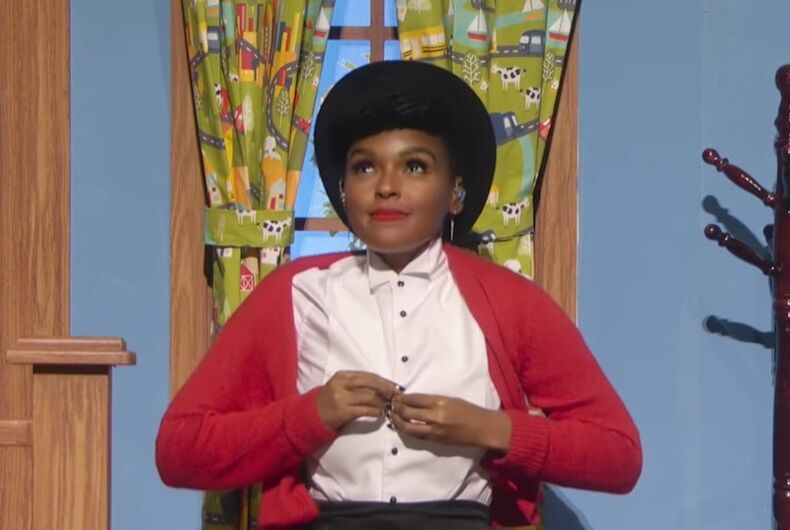 LGBTQ people didn’t get many of the nominations at last night’s Oscar awards, but they still managed to steal the show.

Elton John, along with longtime collaborator Bernard Taupin, won the award for Best Original Song for “(I’m Gonna) Love Me Again,” from the soundtrack for Rocketman, the biopic about John.

Related: LGBTQ stories won big at the Oscars last night & we looked good on the red carpet too

During his acceptance speech, John thanked his husband David Furnish and their two sons.

“How much do I love you? Daddy loves you,” he added, for his sons.

Out performers Janelle Monáe and Billy Porter performed a show-stopping opening number, which started with a tribute to Fred Rogers, Monáe singing his iconic song “A Beautiful Day in the Neighborhood.”

Later in the number, Porter appeared in a long gold coat and big, sparkly glasses and sang part of “I’m Still Standing” by Elton John.

Monáe then acknowledged “all the women who directed phenomenal films,” a reference to how no women were nominated for Best Director this year.

“I’m so proud to be standing here as a Black queer artist telling stories,” she said. “Happy Black History Month.”

Monáe and Porter also got attention on the red carpet. Monae wore a Ralph Lauren dress with 168,000 Swarovski crystals.

A look at Janelle Monae in custom Ralph Lauren, a crystal-laquered silk lamé tulle mesh evening dress with a draped hood and an open back. Required more than 600 hours of hand-embroidery work featuring more than 168,000 Swarovski crystals … #Oscars pic.twitter.com/E9bIDDb0fK

And Porter dazzled in a dress with a bodice made up of 24-carat gold feathers.