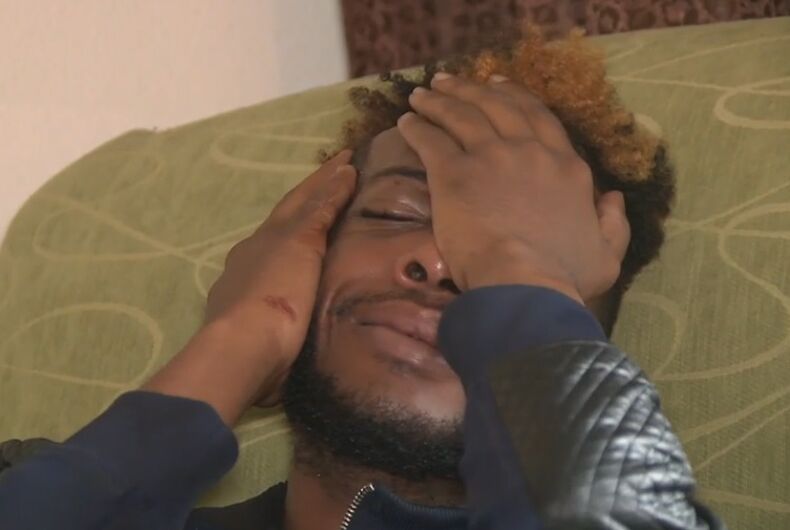 Clive Khouri said that he and a friend were kissing when the gunmen opened fire.Photo: Screenshot/WPLG

Two queer men in Florida say that they came under gunfire after kissing in their car. Three people were injured by the spray of bullets, including a woman in a lesbian couple.

At 7:30 p.m. on Tuesday, Clive Khouri said that he and his friend were driving in the car when they were ambushed by several men in ATVs southwest Miami-Dade. The unidentified men opened fire on them, possibly after the two men kissed.

Even as Khouri tried to drive away, the men followed them and continued shooting.

“When I tried to speed off to come around this corner, they kept trying to shoot, shoot, shoot,” Khouri told WPLG.

He suspects it was an anti-gay hate crime: “Some of the guys probably saw us kissing in the car.”

“He said, ‘Look,’ and blood is flowing, so I grabbed him and put him in the house,” said Lilian Brown, the mother.

The friend was shot in the head and was taken to the hospital in critical condition. A bullet grazed Khouri’s head.

42-year-old Shakena Jefferson’s head was grazed by two stray bullets from the attack as she was sitting in a car parked in front of her house.

“My wife got shot in the head,” said Janet Medley, Jefferson’s wife. She explained that they were getting ready to go to the store and that Jefferson was in the car waiting on her when the shooting started.

“Two bullets went straight off her head, and I was standing here by my daughter’s car.”

“She’s afraid, she feels like the bullet is still in her head,” Medley said. “The bullets were just flying across my ear. I can just hear them ringing in my ears.”

Police say they found the three injured people when they arrived on the scene and that the two or three men in ATVs had already left. They said that the cars were riddled with bullets.

“We don’t have too much information as to who these individuals may be but obviously we’re asking the community that if anybody may have heard or seen anything, regardless of how minor it may be, contact Crime Stoppers or investigators,” Miami-Dade Police Detective Alvaro Zabaleta said.

Jefferson is home from the hospital and is still in pain from her injuries.

“It’s a tragedy,” Medley told NBC Miami. “I can’t even protect my own family and my own home. They don’t even feel safe.”