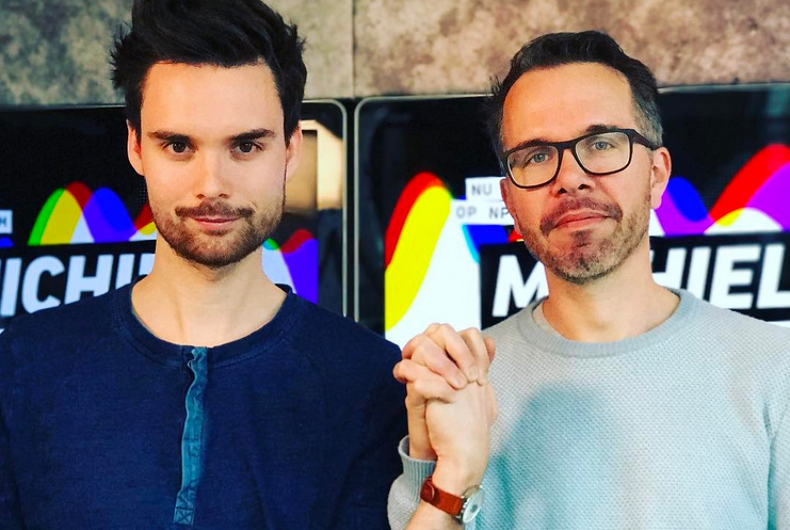 Following a brutal attack this weekend on a gay couple, two male lawmakers showed up to a government meeting holding hands yesterday.

Jasper Vernes-Sewratan and his husband Ronnie Sewratan-Vernes were attacked Saturday night in the small Dutch town of Arnhem while walking home from a date and holding hands. They say that the attackers – a group of six to eight teenage boys – shouted anti-gay invective at them. Both suffered injuries and Ronnie had several teeth knocked out when, according to Jasper’s account, one of the assailants used bolt cutters to beat Ronnie in the face.

In response to the attack, journalist Barbara Berend called for men to hold hands in public to show solidarity with the victims. The hashtag #allemannenhandinhand, which means “all men holding hands,” was trending on Twitter in the Netherlands.

Two members of the leftwing D66 party – Alexander Pechtold and Wouter Koolmees – responded to the call before a meeting to discuss the formation of a new government.

“We think it is quite normal in the Netherlands to express who you are,” Pechtold told DutchNews.nl.

The Deputy Prime Minister also posted a picture on Twitter holding hands with a man.

Men working for the Netherlands’ UN office also posted a picture of them holding hands.

A couple of police officers also got involved.

And a professional soccer team.

Police arrested two people, a 14-year-old and a 20-year-old, in connection with the attack. Yesterday, four more young people voluntarily turned themselves in to police.

The lawyer of one of the boys, Gerald Roethof, said that the attackers are all Moroccan and that they deny that they started the fight. He said that the gay couple behaved aggressively towards the teens, that their sexual orientation was irrelevant in the attack, and that a bolt cutter wasn’t used.

Roethof said that one of the assailants is planning on filing a formal complaint against the gay couple.

Our side destroyed Mississippi’s ‘license to discriminate’ law in court