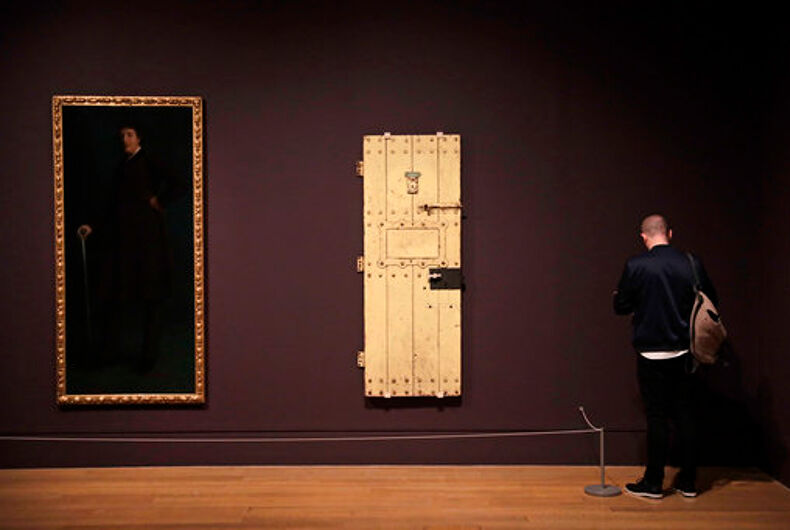 A man stands next to American artist Robert Harper Pennington's "Oscar Wild" painting and the door of Oscar Wilde's prison cell at Reading Jail, during a media preview for the "Queer British Art 1861-1967" exhibition at Tate Britain in London, Monday, April 3, 2017. The show, which opens to the public on Wednesday, includes works that relate to lesbian, gay, bisexual, and trans identities and marks the 50th anniversary of the partial decriminalisation of male homosexuality in England and Wales. Photo: (AP Photo/Matt Dunham)

A portrait of Oscar Wilde that once hung above the writer’s fireplace has gone on display at London’s Tate Britain gallery along with the door to Wilde’s prison cell.

The full-length painting of a dapper Wilde by Robert Goodloe Harper Pennington was sold to pay debts as Wilde awaited trial for gross indecency. In 1895, Wilde was sentenced to two years in prison, a period that inspired his poem “The Ballad of Reading Gaol.”

The items are part of the Tate exhibition “Queer British Art,” which charts work “that relates to lesbian, gay, bisexual, trans and queer identities” in the century before homosexuality was partially decriminalized in 1967.