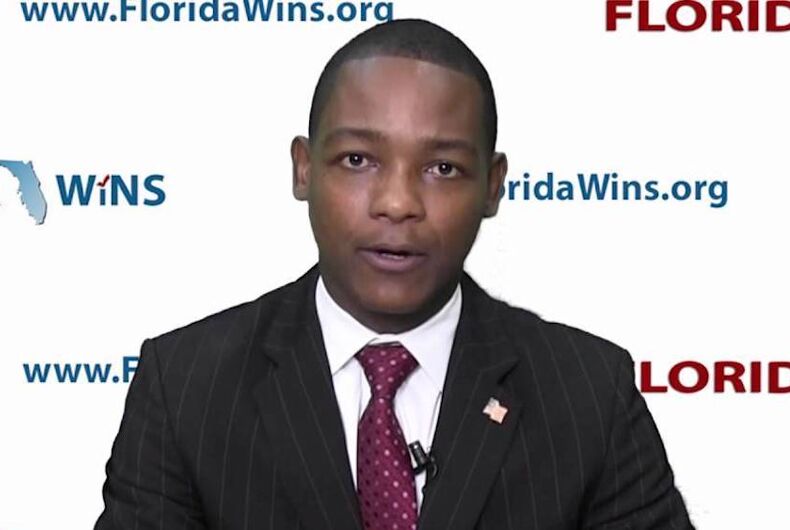 Near the end of Jacquet’s hour-long Facebook video, which he created to refute a Palm Beach Post story questioning his official residence and election violations, he said, “I hear they got ‘Sleepy Hardy.’ That’s all good. That’s the union boy. The batty boy, union boy.” Hardy currently serves as Lake Worth Beach City Commissioner.

Hardy said of the slur, “I have heard that term slung around before and I knew what it meant immediately. It appalled me that a member of the Florida House of Representatives and member of the Florida Democratic Party, which for years has stood up for LGBTQ rights, would use that kind of language.″

Jaquet later apologized, saying, “In the heat of the moment, I said something I should not have said. I apologize for my words that have offended some of my colleagues.”

However, Hardy called Jaquet’s apology insincere, adding that the politician didn’t contact him directly to offer it.

“This was not genuine and sincere apology… not that I expected him to do it,” Hardy said. “This was (an attempt at) damage control, public relations control… to cover up the ugliness in himself that he revealed on Friday.″

“Homophobia is toxic and dangerous. Words matter and legislators on both sides of the aisle should condemn this hateful rhetoric immediately. This is totally unacceptable. Rep. Jacquet’s public statement in response to the backlash over his comments was WEAK and does not demonstrate real contrition for his decision to use the hateful language that he did. His constituents deserve better.”

Hardy, who was raised by two mothers added, “[Jaquet’s slur] was still personal for me … and I know how hurtful those types of slurs can be. I don’t think that language represents [Jacquet’s] constituents. That has no place in politics and it certainly has no places in the legislature of America’s third-largest state.″

Here is the video where Jaquet used the slur, which is after the 58-minute mark.

U.K. healthcare workers will be able to refuse to treat homophobic & racist patients