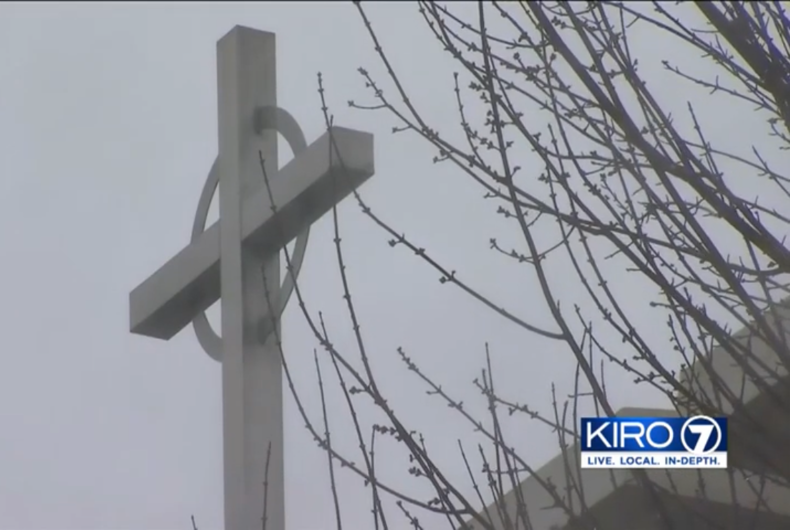 Last week, the Archdiocese of Seattle faced severe backlash for supposedly asking for the resignations of two teachers employed at Kennedy Catholic High School who were engaged in separate, same-sex relationships. They claimed that both “voluntarily resigned.”

This week, statements from the Archdiocese and the school made it clear – they indeed forced them out.

Related: Students thought their Mormon university was OK with gay people for a second. Oops.

While the acting spokesperson for the Archdiocese emphatically told reporters last week that “no one requested their resignation — no one,” they have since retracted the statement and ‘clarified’ that they had no official statement.

Then, Archbishop Paul Etienne admitted in a statement late this week that they wanted the teachers out of the Burien, Washington-area school, saying “Those who teach in our schools are required to uphold our teaching in the classroom and to model it in their personal lives.”

He continues, “we recognize and support the right of each individual to make choices. We also understand that some choices have particular consequences for those who represent the church in an official capacity.”

The ‘particular consequence’ was forcing the teachers – English teacher Paul Danforth and health teacher/soccer coach Michelle Beattie – to leave their jobs less than three months after they became engaged.

The attorney representing both Danforth and Beattie, Shannon McMinimee, believes this amounts to them being fired, which would likely violate Washington state law. “It was made clear to them from the beginning that once they were honest about being engaged and gay, that their employment was no longer compatible with Kennedy Catholic,” McMinimee told NBC affiliate KING 5.

“They were hoping to have a dialogue with the school, in order to be their authentic selves…and what they thought would be a conversation with their principal turned into being called into the [school’s] President’s office and being told that the superintendent of the Archdiocese school system wanted their keys the minute they found out they were gay and engaged,” she explained.

School President Mike Prato’s statement claimed that the school “gave them the option to select the date” their employment would end, but still framed their exits as a voluntary resignation from both teachers. McMinimee expressed that the only way Danforth and Beattie “might be allowed to finish the school year” by the Archdiocese was if they “didn’t wear their rings and kept their engagements secret.”

Still, McMinimee says, the pair would rather not seek further legal reprimands against Kennedy Catholic or the Archdiocese. Instead, “they hope that this sparks a greater discussion of change.”

Sean Nyberg, Danforth’s fiancé, was one of the first to publicly assert that the teachers were fired due to their engagement. He said in his latest statement that “[School president] Prato is so divorced from reality, even the introductory sentence is a lie.”

“[Danforth] has not been able to speak due to a confidentiality agreement that was mutually dissolved [on Feb. 20], in part because of Prato’s prior missteps in communication,” Nyberg asserts.

Currently, a crowdfunding campaign in support of both Danforth and Beattie has raised over $35,000.

Several students of Kennedy Catholic, in addition to their peers at other Seattle-area Catholic schools and supportive adults, staged multiple protests – including a massive walkout complete with holding signs and chanting outside the Archdiocese headquarters. “Everyone deserves to love who they love,” said one student. Several politicians joined them in condemning the school and archdiocese’s decision.

Watch footage from the student walkout protest and McMinimee’s statements in the news clip below.