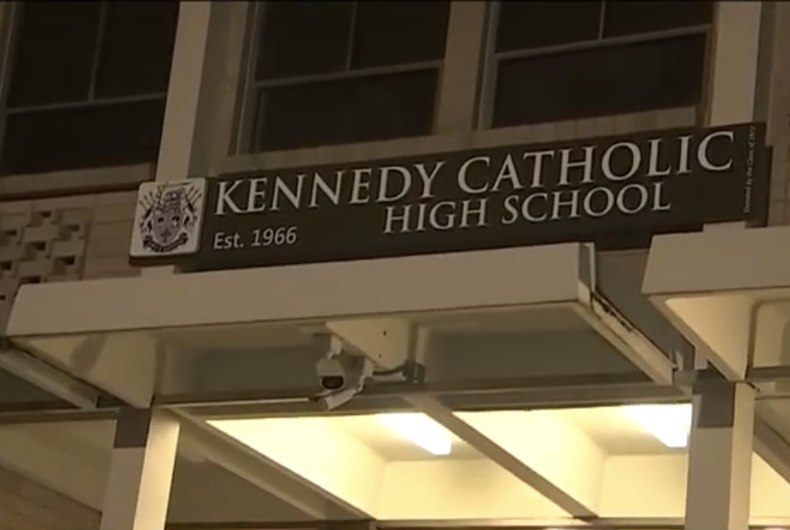 The Archdiocese of Seattle is being accused of forcing two popular teachers to resign their positions due to their same-sex relationships. The teachers in question worked at Kennedy Catholic High School in Burien, Washington, and claim they found out about their ouster through a memo emailed to parents on Valentine’s Day.

Now, parents, students, and local councilmembers are calling out the archdiocese for the unpopular decision. The Archdiocese of Seattle maintains that the teacher’s resignations were voluntary.

A protest is being planned on Tuesday morning in front of the archdiocese, while students will stage a walkout that afternoon, when they return to class.

Paul Danforth – an English teacher – and Michelle Beattie – the a health & wellness teacher and soccer coach – both became engaged to partners of the same sex recently. Danforth was proposed to by his fiancee at Disneyland in November.

If what the archdiocese is accused of is accurate, they could be found in violation of 2006 laws that prohibit discrimination against state employees based on sexual orientation. “Both teachers voluntarily resigned their positions. As this is a personnel matter, we cannot comment further,” they claimed in a statement.

Both teachers have secured legal counsel and have not publicly commented. Danforth’s partner, Sean Nyberg, did say in a statement that Danforth “is no longer employed specifically because he and I got engaged.”

Council member Dave Upthegrove, who represents King County, posted the email to social media, telling his supporters that “this is a reminder of the blatant discrimination that continues to exist in our community against members of the LGBT community.”

Councilmember Joe McDermott also wrote online, “by forcing the resignations of two teachers over their sexual orientation, Kennedy Catholic and the archdiocese of Seattle tell young people – especially LGBTQ students at Kennedy – is that being LGBTQ is wrong.”

I’m angry that Kennedy Catholic High School has forced the resignations of two respected teachers because they are gay. …

Nyberg has organized a crowdfunding campaign, apparently on behalf of both Danforth and Beattie.

In a statement, Burien’s Pride organization wrote that “What happened at Kennedy Catholic High School in Burien is an unfortunate but stark reminder that people around the country, including our very own state of Washington, can be fired for who they love.”

See Upthegrove and others speak on the issue in the video below.

Could bathhouses make a return to San Francisco? This proposal may make it happen