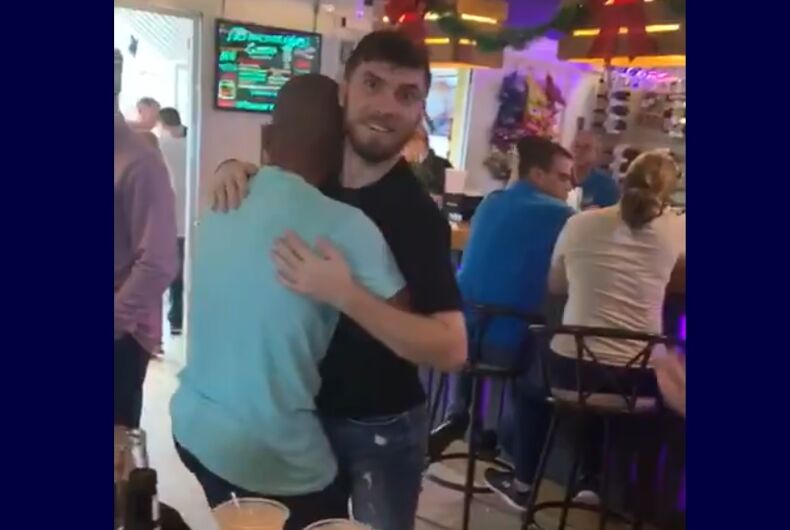 The two men dancing at Gyros, before getting kicked out. Photo: Screenshot/Trey May via Twitter

Two men say they were kicked out of a bar for dancing together, but only one of them is actually gay. The other man is a straight male friend of his boyfriend’s family.

Trey May posted a video to Twitter that he says shows him getting kicked out of the Gyros bar in Orocovis, Puerto Rico.

Related: This gay high school couple was kicked out of a restaurant for hugging

May and Luis Santiago-Rivera were at the bar when May started dancing with the man as Santiago-Rivera danced with a female partner. May posted a video of the two having fun when they’re approached by someone.

In a separate video, the party is outside getting berated by a bar employee.

“So this place is very homophobic,” May said in the later video. “Just got kicked out for dancing with someone who wasn’t even my boyfriend. So if you’re ever in this area in Puerto Rico, please, do not go. These people are very homophobic.”

FULL VIDEO OF WHAT HAPPENED pic.twitter.com/0WHRxsMZ2T

Santiago-Rivera told CBS correspondent David Begnaud that the two men were dancing when a bar employee told them “Heterosexuals can dance, not men with men.” He also said that the employee called them homophobic slurs.

A representative of Gyros sent Begnaud a statement on Facebook:

Greetings, everything was a misunderstanding, nobody threw them away, they were only asked to go outside since they had also lit an electronic cigarette, those who quickly get frustrated are you and quickly defame what is not. That’s all I say, I just ask you not to continue commenting on something that is not real. Goodnight.

Santiago-Rivera said that someone in the group was using an e-cigarette, but that they had been using it for an hour without anyone at the bar telling them to turn it off or go outside.

The couple said that they’re “embarrassed” in front of their family and “humiliated” by the discrimination.

Here are New Year resolutions that all LGBTQ people can share