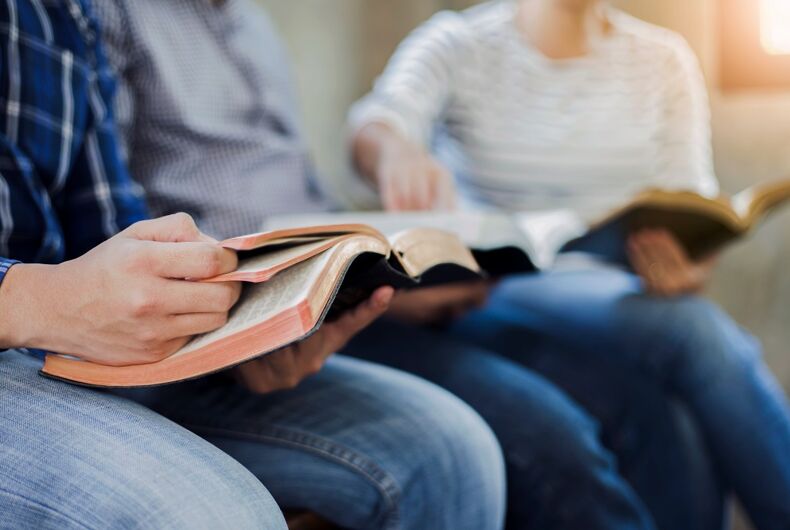 Nathan Brittsan has joined Joanna Maxon as the second ex-student to file a lawsuit against the Fuller Theological Seminary, claiming it explicitly discriminates against them for being married to a same-sex partner.

Both are seeking over $1 million in damages from the religious school when their case is heard in the U.S. District Court for the Central District of California, the federal court where Fuller’s main campus resides. Many are watching this case as it’s “believed to be the first of its kind” regarding religious organizations and legally, married same-sex couples

Both Brittsan and Maxon are accusing Fuller of violating Title IX of the Education Amendments of 1972, which prohibits sex discrimination in education. While it does not explicitly list sexual orientation as a base of sex discrimination, it has been interpreted that way in the past. All schools that receive federal funding of any kind are required to adhere to Title IX, but many religious schools “have received exemptions”, namely under the Trump administration.

Both students were asked to leave Fuller once it was known that they were married to same-sex partners, which the school explicitly says does not fit their “sexual standards” of conduct. “Homosexual forms of explicit sexual conduct [are] inconsistent with the teaching of Scripture,” the policy reads. “[Fuller] does lawfully discriminate on the basis of sexual conduct that violates its biblically based Community Standard Statement on Sexual Standards.”

Maxon filed her case first in November 2019, a year after she was expelled one semester before her graduation from Fuller. Maxon studied online mostly, but her classmates and professors knew of her marriage. Once administrators at the evangelical seminary found out about it through her tax returns, however, they asked her not to return.

The school may have violated Maxon’s rights under FERPA (The Family Educational Rights and Privacy Act), which makes tax returns confidential information that can’t be shared or analyzed unless they’re granted permission to do so.

Brittsan learned of Maxon’s lawsuit through the news and decided to join the lawsuit earlier this month. He was expelled in 2017, two days before he was set to begin studying at the school, when they learned he wanted to change his name at the institution’s to match his partner’s. He appealed the decision and attended class for a few days, but “during the appeals process he was coerced into withdrawing,” his lawsuit says.

The attorney for both Brittsan and Maxon, Paul Southwick believes that the students were “lulled into a false sense of security” by what they believed to be an interdenominational institution. “What Fuller has created is a community of diverse religious backgrounds…that’s part of what attracts people to a place like Fuller,” Southwick said.

“The Fuller community, in general, is a place where Maxon and Brittsan can thrive,” he contends. “Unfortunately, there are a few administrators…who have taken this hard-line action against them.”

Fuller’s attorneys claim that they have the right to make moral decisions regarding its students. “In 2012, the U.S. Supreme Court ruled unanimously that the First Amendment commits these kinds of issues to religious groups to decide, not the courts,” senior attorney Daniel Blomberg said. “A healthy separation of church and state demands nothing less.”

On the other end, Southwick believes that this case could lead to a landmark decision for LGBT rights in the country regarding religion: “It’s a very important case at this time in our nation’s history…this case could set an important legal precedent that if an educational institution receives federal funding, even if it’s religiously affiliated, even if it’s a seminary, that it’s required to comply with Title IX prohibitions on sex discrimination as applied to LGBT individuals.”

Even if it is determined that Fuller does not have to comply with Title IX, the school will also have to prove that they did not violate Brittsan’s and Maxon’s civil rights protected in Title IV of the Civil Rights Act. Fuller has not been previously determined as an organization exempt from Title IV.

In 2013, a gay student made headlines at Fuller for establishing the school’s first LGBT student club. The Associated Press reported them as the first evangelical seminary to allow such a club. “It quickly became apparent to me that I was going to be OK and that I wasn’t going to have to forsake my faith for my sexuality,” club founder Nick Palacios said at the time.

Democrats could grab a Senate seat in Kansas, thanks to this former Republican