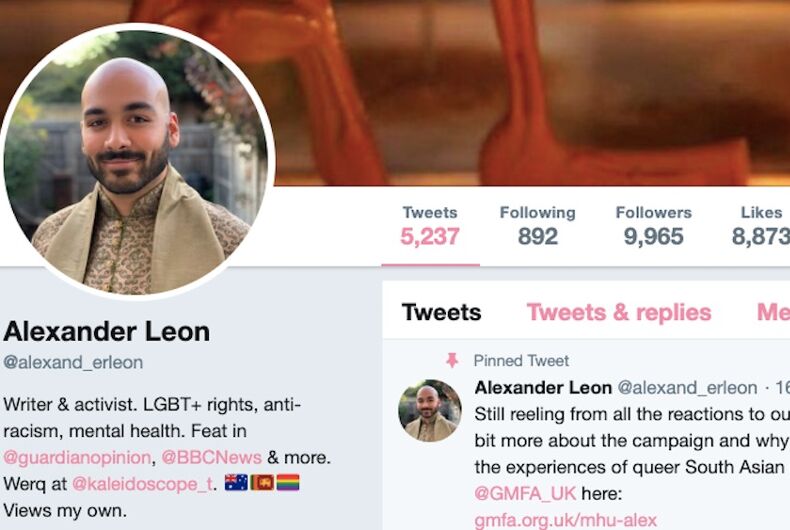 Alexander Leon — a writer employed at the Kaleidoscope Trust, an Australian LGBTQ organization — has gone viral this week with his tweet stating that queer people “don’t grow up as ourselves, we grow up playing a version of ourselves that sacrifices authenticity to minimize humiliation & prejudice.”

Leon added, “The massive task of our adult lives is to unpick which parts of ourselves are truly us & which parts we’ve created to protect us.” He called this task “a gift in disguise” as it compels queer people to undergo profound self-discovery that most cisgender and heterosexual people never achieve.

Related: Two men accidentally propose to each other at the same time in a heartwarming viral video

His tweet has since been shared on social media thousands of times. He has used the tweet’s popularity to ask people to donate to the Australian Red Cross to help fight the raging Australian bushfires.

It's massive and existential and difficult. But I'm convinced that being confronted with the need for profound self-discovery so explicitly (and often early in life!) is a gift in disguise. We come out the other end wiser & truer to ourselves. Some cis/het people never get there.

This has blown up unexpectedly and I'm very humbled ❤️ If this meant something to you & you are able I'd really appreciate any donations to help families affected by the Australian bushfires. I am Australian and seeing my country burn is heartbreaking.https://t.co/AWeUgit7Jl

Leon’s words seem to have affected other LGBTQ Twitter users:

You truly had me in tears,because it’s so raw & true…what an amazing way to describe”us”in a very short but effective way…thank you so so much @alexand_erleon because this will also educate so many people who are struggling to understand their queer children,siblings etc❤️🙏🏼

Being forced not to fit available models of how our lives ought to be leaves us first alienated, then vulnerable, then certain, and last empowered in our sense of self.

Knowing that we cannot live to the taste and comfort of others enables us to live for ourselves.

Leon is right, as famous LGBTQ books like The Best Little Boy in the World and The Velvet Rage can attest. Queer people, especially those who live in conservative and anti-LGBTQ societies, are often emotionally abandoned by adult authority figures in their lives.

Because many LGBTQ people have to live in the closet for their own safety, they may avoid people, hobbies and expressing certain emotions just to avoid being perceived as queer. Over time, they deny the grief and anger they feel at being mistreated and begin to internalize and deny it, often using self-effacing humor and achievements as a cover.

Lee Kinsey — an out gay psychotherapist, sex therapist and couple’s counselor in Texas — has told LGBTQ Nation that a majority of LGBTQ people’s psychological difficulties stem from anti-queer stigma. Sadly, mental health remains out of reach for many queer people, especially those who are poorer and people of color.

However, Leon’s tweets show there’s a shared and growing recognition of the shared struggles between queer people, providing an illustration of how we might support one another as we work through our trauma to live as our authentic selves.

In response to his tweet going viral, Leon wrote:

My tweets went viral overnight & beyond it being extraordinarily humbling (& overwhelming), I am so emboldened by the response. I adapted the tweets from an essay I thought too personal/niche to attempt to get published. All I’ve ever wanted to do in any of my work is for queer people (& particularly QPOC) to feel seen, heard & understood. I can’t open this app at the moment without ugly crying because y’all are showing me that in my own small way, I’m achieving what I set out to do. Thank you.