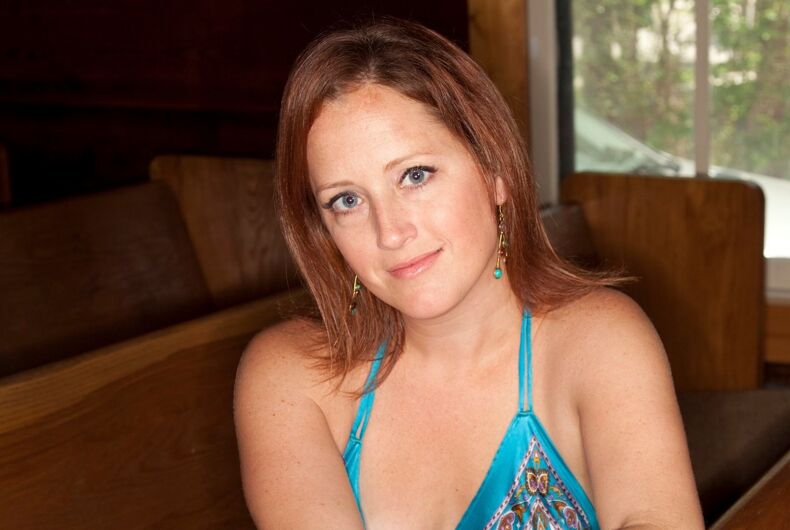 Nikki Araguz Loyd, the Texas transgender activist and one-time reality TV regular, died on November 6, 2019. At present, the cause of her death remains unknown, a fitting end for a life that stubbornly refused to fit neatly into any of our culture’s convenient trans narratives: role model or villain, spotless heroine or tragic victim.

I know the intractability of Nikki’s story in a peculiarly intimate way; for nine months in 2016, I helped her wrangle the raw materials of her life into a shape that resembled autobiography.

Related: Conversion therapy survivor says the Mormon church pays for its members to undergo it

In a certain sense, we were a well-matched pair. We were both children of the 1970s, both raised in Houston suburbs, and both cherished our roles as wives and mothers. But I had grown up in a privileged subdivision while Nikki grew up in working-class Jersey Village.

I had taken nearly three decades to come out as queer, while Nikki had lived her truth as a trans woman since her mid-teens. And I tend to be a kneejerk rule follower, while Nikki acted as if rules were meant to be broken.

One of the first times I hung out with her was at the Texas Capitol. It was 2015, the year of our state’s first round of bathroom bills. A group of transgender Texans and allies had gathered to speak to legislators about the ethical and logistical implications of requiring trans people to use the bathroom aligned with the gender on their birth certificates.

For many LGBTQ Texans, it’s a familiar ritual: every time the legislature is in session, you put on your best business casuals and try to tell a compelling story about your humanity to a bunch of bored legislative aids. Perhaps it was my own ambivalence about the whole song and dance that made me smile when Nikki conspiratorially showed me the pictures on her phone.

To illustrate the absurdity of asking trans women to use men’s restrooms, she had posed topless on a toilet in the hallowed Capitol men’s room. Within minutes, the picture was garnering likes and LOLs on social media. “This,” I overheard a professional LGBTQ lobbyist say, “is why we can’t have nice things.”

That tension between respectability and rebelliousness is indicative of Nikki’s entire career in public life, which began when she was still a teenager and Jerry Springer paid her $500 to reveal her “secret” to unsuspecting guys she had hooked up with back home in Houston.

Critics would say she was reinforcing stereotypes of trans women as duplicitous ensnarers of unsuspecting straight men, but I dare anyone to watch the videos without rooting for the beautiful, sharp-tongued girl who fights back when the audience inevitably piles on. For the rest of her life, Nikki would meet trans women who said that seeing her on Springer (or later Maury Povich or Sally Jesse Raphael) gave them hope and inspiration.

Despite her streetwise scrappiness, there was a part of Nikki that longed for respectability. Specifically, she longed to be a wife and mother.

After her first marriage devolved into a life of petty crime and drug addiction, a newly sober Nikki met her second husband at church. Thomas Araguz had two sons from a previous marriage, and the two quickly settled into the kind of domestic life that Nikki had always wanted. While Thomas went to school to become a firefighter, Nikki founded a lifestyle magazine called Wharton County Living to highlight the homes in the small southern town where they lived.

Things were going well for Nikki. So well, in fact, that she decided to run for mayor of Wharton. And that was where the dream of fitting in and becoming a respected member of this tightknit Texas community was shattered.

An email purporting to tell voters about her “true” identity circulated among the good citizens of Wharton. Nikki lost the election, her magazine lost all of its advertisers, and—in a way—she lost her husband.

Thomas had never publicly acknowledged that Nikki was trans. Now that everyone in Wharton knew Nikki’s history, he chose to feign ignorance rather than proclaim his love for every aspect of her identity and experience.

When Thomas died in a fire in spring 2010, Nikki had already endured more heartbreak and humiliation than most of us could bear. The day after Thomas’s funeral, she was walking to her car when a stranger handed her an envelope. Nikki thought it might be a sympathy card for the widow of a fallen firefighter; instead, it was a legal notice.

Thomas’s mother and ex-wife were filing a lawsuit to have Nikki’s marriage declared null and void. They were challenging her right to Thomas’s death benefits.

At the time, the legal precedent in Texas and around the nation was the devastating Littleton v. Prange decision, which had denied another Texas transgender widow’s legal standing to file a malpractice lawsuit on behalf of her dead husband. The ruling argued, essentially, that a transgender person could never really change their legal gender.

Regardless of whether they had changed their name or ID documents, no matter whether they had undergone surgery or lived for years as their true selves, the Littleton decision meant that the gender on their original birth certificate could always be invoked in court.

If the LGBTQ establishment could have chosen a poster child for their efforts to overturn Littleton, you can bet that Nikki would not have been the first on their list.

As the appeal worked its way through the legal system, Nikki struggled to stay financially and emotionally afloat. In 2012, she went to jail for allegedly stealing a Rolex from a woman she met in a restaurant.

Even at this low point, she never stopped demanding to be treated with dignity and respect. In fact, her stay in Harris County jail was cited as an instigating factor for new policies that required trans inmates to be addressed by their chosen names and to be housed with the gender they identified with, regardless of surgical status.

Simply put, the woman was indomitable. She never stopped hoping for a happy family life, and, in 2013 she met her future husband, William Loyd, a father of two who adored her and stood by her side as she advocated for the trans community.

She never stopped fighting her legal case either. As she struggled to put her life back together after Thomas’s death, she was haunted by the idea that someday another transgender widow might face the same injustice that she was suffering.

Finally, in 2014, the 13th Court of Appeals ruled that Nikki was “medically and psychologically female” and that “an individual who has had a ‘sex change’ is eligible to marry a person of the opposite sex.” The plaintiff appealed to the Texas Supreme Court, and the case was pending there when the Obergefell decision rendered it moot—but only because gender no longer determined the validity of a marriage.

The appeals court’s decision remains significant for superseding Littleton and affirming that a person can change their legal gender in the state of Texas.

In 2015, Judge Randy Clapp reluctantly recognized the validity of Nikki’s marriage to Thomas Araguz. When she finally went to collect the first installment of her survivor’s benefits, which had been held in escrow by the court, Nikki refused to leave Wharton County without cash in hand. She marched to the bank across the street from the courthouse, handed over the check, and walked out with $80,000 in a burlap sack.

Her generosity was as extravagant and reckless as everything else about her. Soon after we started working together, she called me to help an Austin trans woman who was on the verge of homelessness. I called around and found some resources, but I suspected that Nikki was judging me for not doing what she would have done, which was invite the stranger into her home.

I interviewed her for long hours, often probing the details of the most painful moments of her life. Tears were shed on both sides. At the end of each phone call, she would say, “I love you,” and I would secretly think, Don’t do that. Don’t be so trusting and open. I thought that the lesson of her hard life should have been to harden her heart, at least a little.

Nikki and I didn’t have much luck shopping her life story. Agents would bite at the tale of a plucky transgender widow who fought the system and won, but then lose their appetites when confronted with the messy details.

“It’s painful to read about someone who keeps making bad decisions,” one editor told us.

As I sit here – a middle-aged woman with too much debt and not enough savings, an inveterate people-pleaser who has vied for the approval of many a morally bankrupt authority figure, a would-be healthy-eater who just ate one too many pumpkin muffins – it strikes me that making bad decisions is perhaps the most relatable thing about Nikki’s remarkable life.

To the extent that our culture acknowledges trans women heroines, we tend to expect them to be brilliant, beautiful, and wise, with all transgressions neatly tied up in parcels labeled “lessons learned.” Nikki’s life and ambiguous death refuse to play by those narrative rules.

Her story remains an inspiration and a reminder that heroes don’t need to be perfect—or even perfectly respectable. In the fight for justice and equality, we need to celebrate role models in all their complexity and contradictions—if we don’t, we risk losing sight of their humanity, and our own.