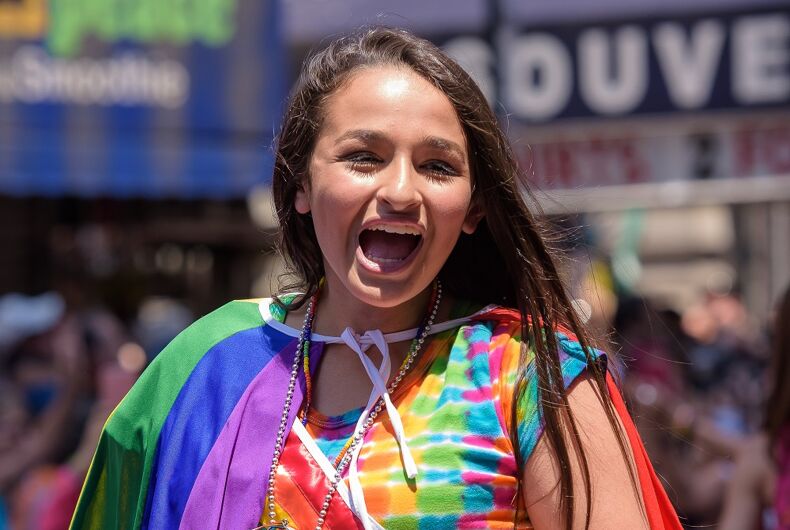 Jazz Jennings at NYC Pride in 2016. Jennings transitioned as a child.Photo: Wikipedia

A Republican lawmaker who is sponsoring one of the harshest anti-transgender bills in the nation just compared the parents of transgender children to Nazis.

“Well, you know, if you care about kids I think you have to prioritize them,” Deutsch said, discussing his bill that would ban gender-affirming medical care for transgender youth. He called gender-confirming medical care the “mutilation of our children.”

“I don’t care if it’s doctors, I don’t care if it’s parents,” Deutsch said about the people making medical decisions. “These kids on the internet, they share these pictures of themselves that just blow you away – of all these surgical scars and it’s terrible. That should not ever be allowed.”

And then he compared those doctors and parents to Nazis.

“To me, that’s a crime against humanity, when these procedures are done by these so-called doctors, you know, that dance on the edge of medicine. I just don’t think it should be done. I think – you know, I’m the son of a Holocaust survivor. I’ve had family members killed in Auschwitz. And I’ve seen the pictures of the bizarre medical experiments. I don’t want that to happen to our kids. And that’s what’s going on right now.”

In an interview with the Argus Leader later, Deutsch defended his Nazi comparison.

“I’ve been to a whole bunch of Holocaust museums all over the world,” he said. “It’s very personal to me. It’s just a simple reflection that the pictures seem similar to me.”

The only similarity that he could specifically name, though, was that scars were involved.

He later issued a statement saying that his comparison was “regrettable,” but he is still trying to get his bill passed.

“That’s not what’s happening in the state of South Dakota or anywhere in our country,” said state Rep. Jamie Smith (D). “I totally don’t agree with him.”

The bill Deutsch introduced would ban a list of surgeries from being performed for the purpose of gender confirmation on someone under the age of 16.

While gender confirmation surgery is incredibly rare for minors, the bill also bans puberty blockers – medications that delay the onset of puberty so that transgender children and their parents have more time to make decisions before the child’s body starts to undergo permanent changes.

A recent study found that puberty blockers were effective in stopping suicidal thoughts in 2/3 of people who wanted them as teenagers and got them.

A different bill introduced in the South Dakota Senate would require school counselors, therapists, and social workers to report minors who are thinking about “self-injurious behavior” to their parents. The bill specifically states that feelings of gender dysphoria are a form of self-injurious behavior, effectively requiring school officials to out transgender kids to their parents.