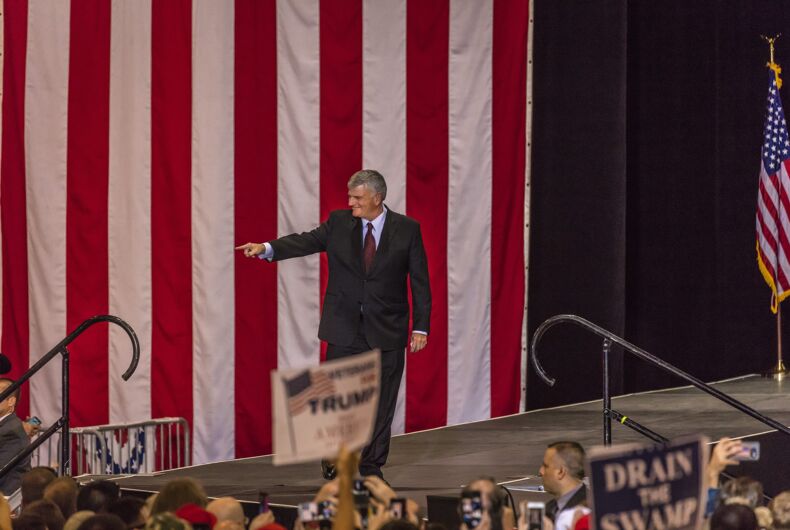 Brits are in an uproar over an upcoming visit from notoriously anti-LGBTQ evangelist Franklin Graham. A strident supporter of President Donald Trump, Graham is firing back, saying he isn’t coming to spread hate. Instead, he says he’s coming to spread love to sinners like LGBTQ people.

A June 12 planned event in Liverpool was canceled after community outcry. A spokesperson for the venue where the event was to be held, said they “made aware of a number of statements which we consider to be incompatible with our values.”

“In light of this, we can no longer reconcile the balance between freedom of speech and the divisive impact this event is having in our city.”

As activists in London also agitated to shut down Graham’s planned appearance, Graham issued an open letter to “the LGBTQ community in the UK.” He denies that his derogatory and demeaning language is “hateful speech” and tries to explain it as “Good News” for the “spiritually” dead.

“The rub, I think, comes in whether God defines homosexuality as sin. The answer is yes. But God goes even further than that, to say that we are all sinners—myself included. The Bible says that every human being is guilty of sin and in need of forgiveness and cleansing,” Graham posted on Facebook.

“My message to all people is that they can be forgiven and they can have a right relationship with God. That’s Good News. That is the hope people on every continent around the world are searching for. In the UK as well as in the United States, we have religious freedom and freedom of speech. I’m not coming to the UK to speak against anybody, I’m coming to speak for everybody. The Gospel is inclusive. I’m not coming out of hate, I’m coming out of love.”

Graham closes by inviting LGBTQ people to come to listen to his hateful propaganda – like claiming STIs are punishment for ignoring ‘God’s guidelines’ on gender & gays. He regularly cites the Leviticus verse that says gay people should be executed.

Mike Bloomberg may not be quite the long shot everyone thought