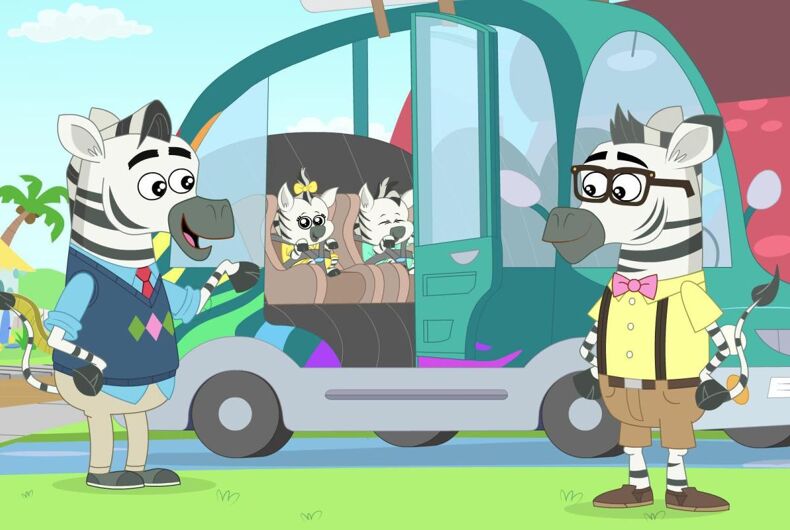 Roy and Ray Razzle are the new gay parents on Chip and PotatoPhoto: Netflix

Move over, queer penguins — the queer zebras are in town!

Season 2 of Netflix’s animated series for preschoolers Chip and Potato has introduced a two-dad family to its cute anthropomorphic world.

The series revolves around the adventures of Chip, a young pug, and her secret friend Potato, a mouse whom Chip disguises with a fluffy hoodie and pretends is a stuffed animal.

It’s unclear why Potato has to be kept a secret (though there are hints that everyone else is afraid of mice), but in some ways, that’s irrelevant. Potato acts as Chip’s helper and confidence booster as Chip starts kindergarten and begins to encounter new friends and situations. It’s a twist on the theme of an imaginary friend or security blanket but makes the friend/blanket a little more real.

Potato could also be seen as a manifestation of Chip’s better self, guiding her as she grows. Chip also lives with her parents, Little Momma and Little Poppa, her older brother Spud, and (partway through Season 1) their little sister Tot.

It’s a cheerful, peppy show that manages to stay on the watchable side of cutesy. There are lots of laughs and giggles throughout, and Chip and her family use the terms “pug” and “puggy” as general-purpose positive adjectives. (Her parents are “puggy proud” of her; she asks for things by saying “puggy pleasey”; and agrees with a “puggy promise.”)

Kids in the target age range are likely to be delighted by that bit of linguistic fun even if grown-ups may tire of it — but even adults should warm to the show’s gentle lessons on self-confidence, learning new things, making friends, and being kind. And unlike many other children’s shows for this age range, there’s a light story arc and some continuity across the episodes.

In episode 8 of Season 2, we meet new neighbors Roy and Ray Razzle, two dad zebras, and their baby twins, Ron and Ruby. We see them again in episode 10 when they wish Chip a happy birthday. Chip and her parents treat them just like any other family and don’t blink at the fact that there are two dads.

There are other kinds of diversity in the show as well. Racial diversity doesn’t exactly apply, but there are a variety of animal species who populate the town, and this feels like an analogy for people of different backgrounds living together in community.

Chip’s best friend Nico, a panda, lives with his single mom. The school principal, Mrs. Wooly, is a sheep who uses a wheelchair.

Rainbow Forest School, where Chip goes to kindergarten, is decorated with rainbows everywhere – including Mrs. Wooly’s wheelchair and socks – though this feels simply colorful rather than intentionally queer. Sometimes a rainbow is just a rainbow.

Still, families for whom rainbows have a special queer meaning will be especially delighted.

Notably, the two restrooms at the school are marked identically. The two side-by-side doors each have matching rainbow-colored circles with the image of a toilet in the center.

We see them as the teacher, a mole named Mr. Diggerty, is taking the students on a tour of the school. “And those are the bathrooms you will use!” he declares. I see no other way to interpret that but to see them as all-gender restrooms.

Chip, who is running to catch up with the main group, pauses in exhaustion in front of them for a few moments.

Why do these restrooms matter? As Welcoming Schools explains, providing access to an all-gender or gender-neutral restroom is one of many things schools can do to “create gender-expansive environments that affirm all children.”

There are as yet no obviously gender creative, nonbinary, or transgender characters on the show — but that’s no reason not to have restrooms that offer a good example of inclusive practices.

The show was co-produced by Wildbrain and Darrall Macqueen and premiered on the Family Jr. network in Canada in 2018. The first season came to Netflix last May and the second at the end of November.

Give it a watch. Puggy please?