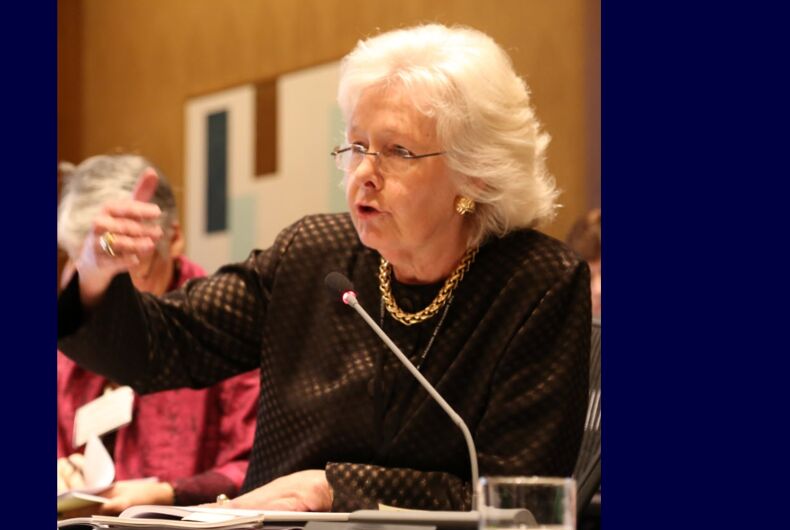 The judge who wrote the historic Goodridge decision that legalized marriage equality in the first state in the U.S. said that she gets thanked every week for that decision.

The state supreme court in Goodridge v. Department of Public Health ruled that the Massachusetts Constitution’s guarantee of equal protection and due process requires that the state issue marriage licenses to same-sex couples.

By May 2004, the state started issuing marriage licenses to everyone, regardless of gender, making it the first state to recognize marriage equality.

Margaret Marshall, who is now retired, was chief justice of the Massachusetts Supreme Court at the time and she wrote the majority opinion in that case.

Speaking at Duke University, Marshall said, “Goodridge was in November 2003. There has not been one week, anywhere in the world, where someone hasn’t come up to me and said, ‘Thank you.'”

It’s not hard to imagine why. In the decade that followed her ruling, other state courts started to force states to recognize marriage equality for same-sex couples. These states showed that many of Christian conservatives’ arguments against same-sex marriage – like that it will lead to the legalization of incest and bestiality or that the divorce rate for straight people would somehow skyrocket – had no basis in reality.

In the U.S. Supreme Court’s 2015 Obergefell decision that legalized marriage equality nationwide, Justice Anthony Kennedy quoted Marshall on the importance of civil marriage: Marriage “fulfills yearnings for security, safe-haven, and connection that express our common humanity, civil marriage is an esteemed institution, and the decision whether and whom to marry is among life’s momentous acts of self-definition.”

Originally from South Africa, Marshall led a student group that fought against Apartheid in the 60s before moving to the United States, attending law school, and eventually becoming the first woman to be chief justice of the Massachusetts Supreme Court.

In 2017, Marshall received the Public Service Award from the Boston Bar Foundation.