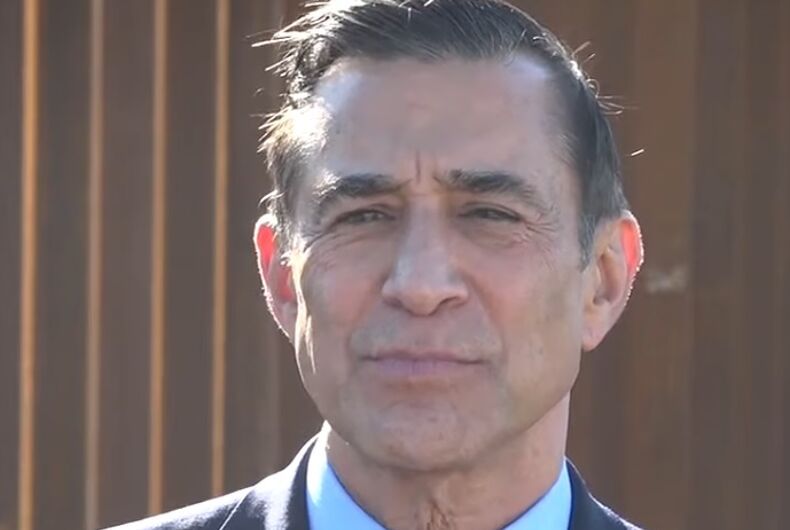 Former Rep. Darrell Issa (R-CA) has been accused of gay-baiting his opponent in a new campaign ad, an accusation that Issa denies.

Issa – who represented the coastal areas in north San Diego County in Congress until he retired at the beginning of 2019 – is running for Congress and is currently facing off against his primary opponent former San Diego City Council member Carl DeMaio, a gay Republican.

A new ad from Issa’s campaign attacks DeMaio on issues like immigration and accuses him of not supporting Donald Trump. The ad shows an image of gang members when discussing immigration.

But the ad also highlights two headlines about DeMaio, one from the LA Blade that reads “Carl DeMaio: California’s gay GOP kingmaker,” and another from the Hill: “Gay GOP Candidate: Party Must Change.”

Because those headlines don’t say much about DeMaio other than that he’s gay, some have criticized Issa for gay-baiting DeMaio.

“Campaigns should focus on people’s positions on the issues, not people’s sexual orientation,” said a spokesperson for San Diego Mayor Kevin Faulconer (R), who endorsed Issa.

“It’s a searing comment on Issa’s character that the former Vista congressman would try to take advantage of hateful views of the LGBTQ+ community,” said the San Diego Union-Tribune in a scathing editorial. “Gay-baiting is unacceptable and unforgivable.”

Issa, for his part, says that the headlines weren’t considered offensive when they were published, so what’s the big deal about using them in a campaign ad?

“Those are actual headlines — and on the actual dates they were printed, they were not considered to disparage [DeMaio],” he said. “I certainly think you should talk to The Hill and the Blade and ask them why they use those words.”

DeMaio used the controversy as an opportunity to call out Issa on the two issues in the attack ad.

“I’d much rather talk about things that matter to voters — like how Darrell Issa authored the amnesty law to benefit 11 million illegal immigrants or was the only Republican to call for a special prosecutor to investigate President Trump,” he told the LA Times.

Issa is generally not supportive of LGBTQ equality, having voted against both marriage equality and LGBTQ discrimination protections. He consistently got low scores on HRC’s Congressional Scorecard.

Editor’s note: A previous version of this article identified Rep. Issa as a Democrat. We regret the error.

Integrity is on trial during Donald Trump’s impeachment hearings