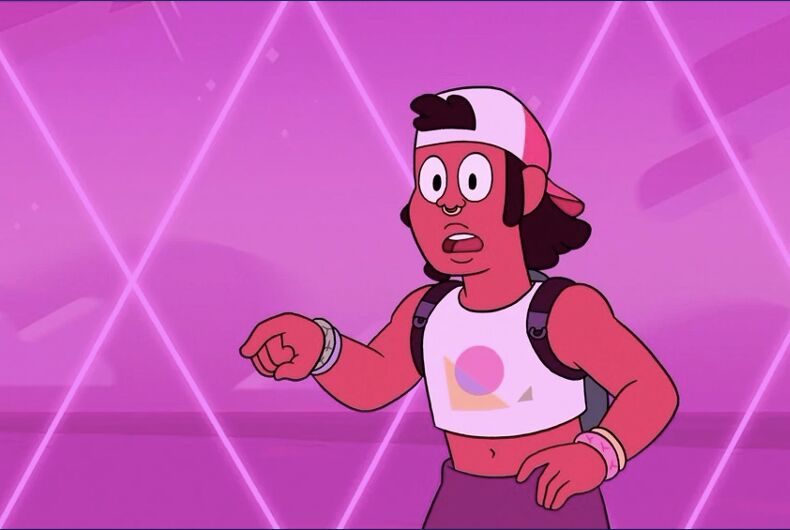 Steven Universe: Future takes place a few years after the original series during Steven the titular character’s teenage years. Steven lives amongst his human and alien friends as they navigate friendships and intergalactic conflicts on earth and in the cosmos. Steven Universe has introduced lesbian, transgender, intersex and non-binary characters in its six-year run.

Shep appeared “Little Graduation,” episode nine of season one which aired late last week. In the episode, it’s revealed that Shep is dating Sadie Miller, the former lead singer of the horror-themed rock group Sadie Killer and the Suspects. Shep met Sadie during one of her band’s concerts and they’ve been dating for two months.

When Steven spends time with Shep, Sadie and Sadie’s ex Lars at a celebration on the beach, Steven bottles his feelings about his old friends growing apart. Steven’s emotions cause him to unwittingly trap his pals under a pink dome shield accidentally generated by Steven’s magical powers.

Shep perceptively realizes that Steven is unconsciously trying to stop his friends from leaving him and helps convince Steven that his friends will always be his friends no matter where their lives lead them. Shep’s pep talk helps calm Steven, eventually dissipating his magic dome.

In addition to playing Shep and Angel in Pose, Moore has also been cast in the upcoming horror flick Escape Room 2. Moore has also performed with Katy Perry on Saturday Night Live and has appeared in two short films and a few music videos. They also starred in the film Queen & Slim. They have also appeared in fashion shoots for Vogue, GQ, Gucci, and Dior.

Here are New Year resolutions that all LGBTQ people can share