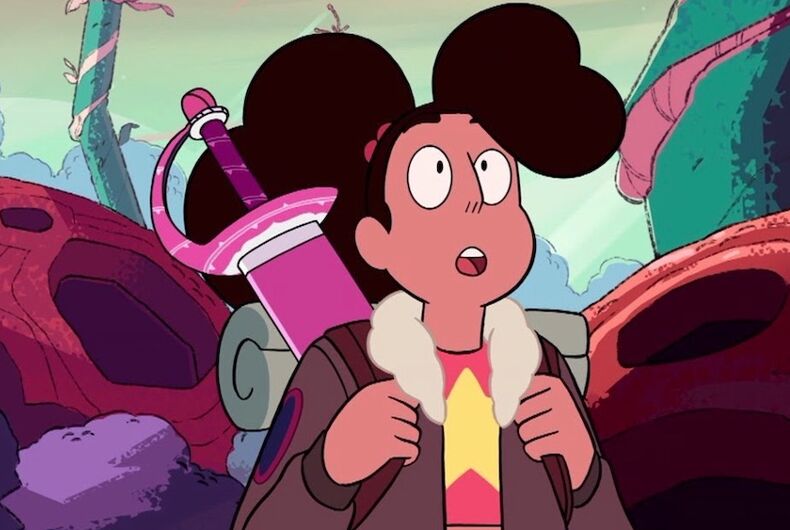 Fans of the Cartoon Network show Steven Universe already know that it’s one of the queerest kids’ cartoon series ever. But it’s getting even queerer now that its creators have revealed that a major character, Stevonnie, is both intersex and non-binary.

In a recent public service announcement (PSA) on Cartoon Network’s Instagram, Stevonnie flips through their own Instagram while discussing positivity and negativity on social media.

Near the beginning of the PSA, Stevonnie’s Instagram profile says, “I am an experience. Intersex, non-binary, they/them.” The text is on the screen so briefly that if you blink, you’ll miss it. But this quite possibly makes Stevonnie one of the only out intersex/non-binary kids’ cartoon characters we’ve ever heard of.

Here’s the Cartoon Network PSA where Stevonnie comes out as intersex and non-binary:

Social media can be overwhelming at times, especially the focus on appearance, celebrities, and influencers. Stevonnie shows us that social media is about more than just selfies. YOU have the power to set boundaries, post authentic imagery, and create your own community and support system 📱💖🌟 . @dove #DoveSelfEsteemProject #StevenUniverse

Intersex, in case you didn’t know, is when an individual is born with physical sexual characteristics that are between the usual male or female traits. “Intersex variations can be chromosomal, gonadal, hormonal, genital or any combination of those and other factors,” according to intersex poet and author A.J. Odasso. Odasso adds, “Human sex-characteristic development is a spectrum, just as much as gender identity and sexual orientation are.”

Non-binary, according to the National Center for Transgender Equality (NCTE), refers to people who “don’t identify with any gender” or whose “gender changes over time.” The word literally means someone whose gender falls out of the male-or-female binary.

Stevonnie’s intersex and non-binary identity makes sense when you consider that they’re literally two of the show’s characters — its titular, part-extraterrestrial hero Steven Universe and his best girlfriend Connie Maheswaran — “fused” together.

The show uses such “fusions” as a way to illustrated consensual and non-consensual bonding between people. Characters can fuse together for brief periods of time and then un-fuse, making their individual and co-joined selves operate as two separate identities.

Stevonnie is a tall pre-teenager who seems to charm other characters with their power and beauty. Now, as an intersex and non-binary person, they’ve charmed us as well.