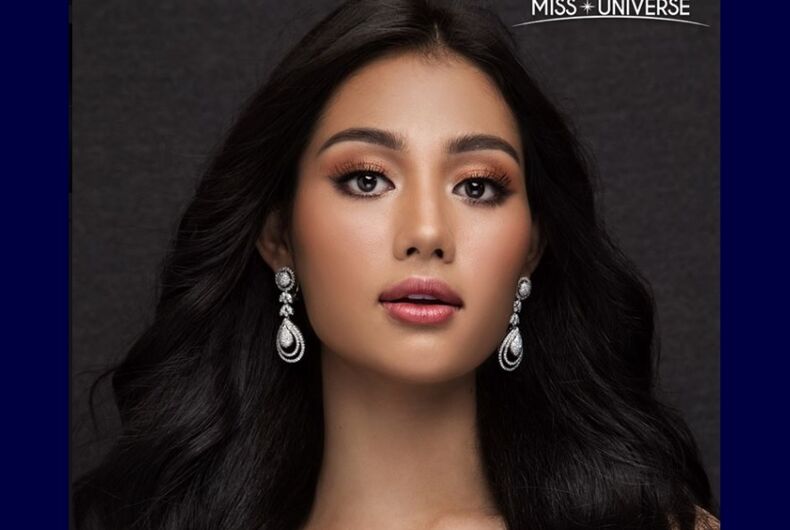 Swe Zin Htet won the Miss Universe Myanmar 2019 title earlier this year, and last month she came out as a lesbian on Instagram.

In a post with several pictures of her and some rainbows, Swe Zin Htet said that she is proud.

“I came to a full realization about my sexual orientation over a long period of time,” she told Missosology, a website that covers beauty pageants. “I knew I was ‘one of them’ way back in 2015.”

“It is personally quite challenging but I feel that I have a greater voice and the best position to promote this cause. Some pageant fans know about it and they still support me but this is the first time I am able to talk about it in public.”

She said that her identity is central to her activism.

“I want the world to accept the LGBTQ+ community and their right to choose their own path and pursuit of happiness,” she said. “Love is the most powerful thing and people fall in love with human beings, not gender. We should always have the freedom of choice and promote equality.”

In her country, homosexuality is illegal and can be punished with up to 10 years of prison. Same-sex relationships are not recognized by the government, people are not allowed to legally correct the gender markers on their documents, and discrimination against LGBTQ people is perfectly legal.

“On paper, homosexual acts remain illegal and there is no official recognition of same-sex relationships, much less acceptance of public displays of affection,” an article published in the Myanmar Times late last year said.

“In practice, cultural shifts are seeing LGBT culture and individuals enjoying more freedom and public lime light with special events, organizational work, dance parties, advocacy and public education making some headway against the ‘old ways.’ There have, in fact, been a few cases of couples declaring their marriage outside the definition of the law, which has attracted controversy, but needed attention.”

Swe Zin Htet did not place in the top 20 of the competition last night, which was held in Atlanta and hosted by Steve Harvey. Zozibini Tunz of South Africa took home the crown.