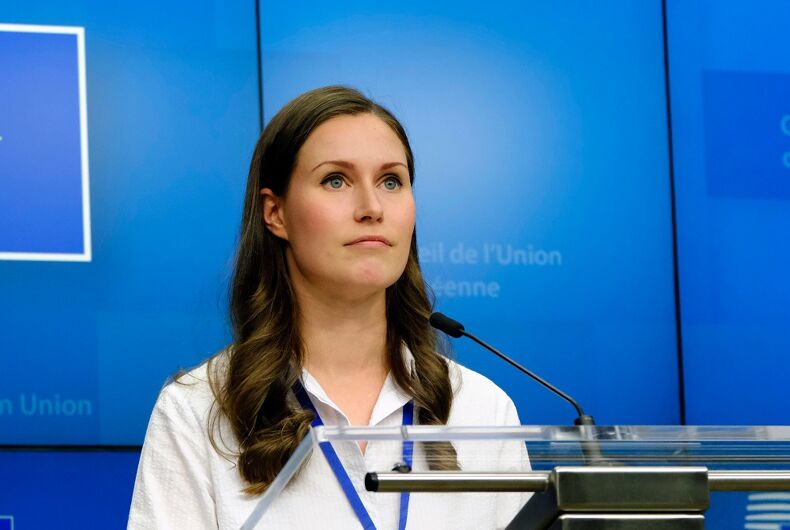 Sanna Marin was just picked by her party to be the Prime Minister of Finland, making her the youngest leader of a government in the world.

And, notably, she was raised by two mothers.

Marin was named Minister of Transport and Communications earlier this year. A rising star in the Social Democratic Party, she was voted by a wide margin to the position of prime minister this month, succeeding Antti Rinne, who has faced criticism for his handling of strikes.

Marin is 34-years-old, making her the youngest currently serving leader of a government in the world when she is sworn in this week.

Born in 1985, she said that the topic of homosexuality was taboo when she was growing up and not feeling free to discuss her “rainbow family” made her feel “invisible” at school.

“That was something that couldn’t be discussed,” she told Menaiset, explaining openness about LGBTQ families in Finland is a very recent thing.

“The silence was the hardest. The invisibility made me feel inferior. We were not recognized as a true family or equal with others.”

She said that she didn’t face bullying.

“Even when I was little, I was very candid and stubborn,” she said. “I wouldn’t have taken anything easily.”

Marin’s family was also working-class – she’s the first person in her family to attend college. She joined the Social Democratic Youth in 2006 and was elected vice president of the organization in 2010.

She held several local elected positions, but rose through the ranks in the party.

Marin said that her mother always made her feel like she could do anything.

“My mother has always been very supportive and has made me believe that I can do exactly what I want,” she said.

Growing up in a working-class and LGBTQ family also made her see the importance of social justice.

“For me, people have always been equal,” she said. “It’s not a matter of opinion. That’s the foundation of everything.”