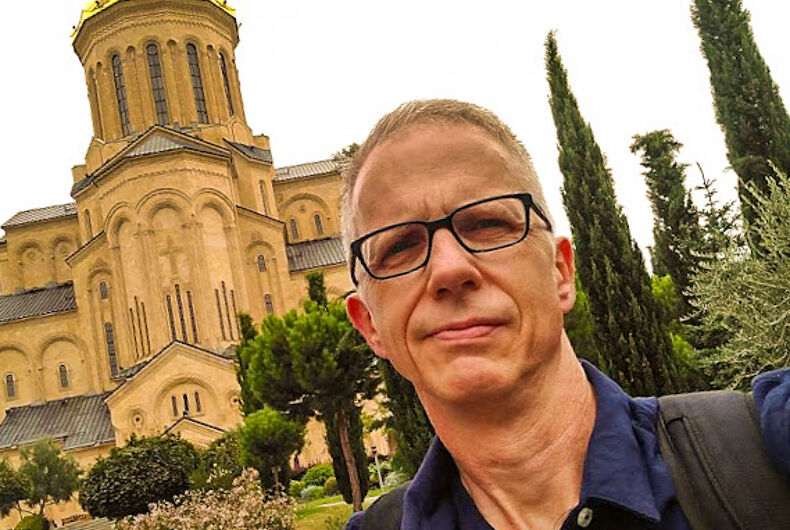 When we first considered visiting Georgia in Eastern Europe, we were worried about anti-LGBTQ discrimination.

The country is home to a number of ultra-right groups, and almost eighty-five percent of the country is a member of the Georgian Orthodox Church, which is far more socially conservative than even mainstream Catholicism. Priests sometimes openly encourage violence against LGBTQ people.

Tbilisi, the country’s biggest city (with 1.5 million people), only has a couple of LGBTQ or gay-supportive bars and restaurants. One recent poll found that just 23% of the country thought LGBTQ rights were important.

Gay friends who’d been here before told us: “Be discreet.”

And sure enough, we’ve had some awkward encounters, with people assuming we’re brothers, or asking us where our wives are. It never occurs to people that we could be a male couple.

Basically, we’ve been discreet. And we’ve mostly been left to ourselves, because we fall under the Weird Foreigner Rule — where local customs and mores aren’t really applied to us because we already seem so strange and exotic to them.

But we were very curious to know how life is for Georgians who are LGBTQ. We’d heard stories about double lives, and closeted married men sneaking away for same-sex encounters.

One gay American friend living here said he’s frustrated because Georgian men had no concept of “dating.” Hook-ups were one thing, but being seen out in a restaurant with a Western man was too much. What if a friend or family member saw him? It would be too suspicious.

Then we started meeting local gay and bi men, and asking them about their lives. We’ve had extended conversations with four of them. Two of the four are out to their close friends, and two are out to close friends and certain selected family members. But none of the four is out to everyone, and only one is out at work.

In the end, we asked all four men the same thing: Is it hard to be gay or bi in Georgia?

To our surprise, all four said variations on the same thing: No, not especially.

Naturally, we pressed them on this point. “Really? But you can’t be out. How do you date? How do you have relationships?”

“That’s my private life,” one said. “No one else needs to know about it.”

None of these men felt pressured to marry women, though one admitted a lot depends on the person’s age. Many gay and bi folks over thirty did still marry, and many still seem to be married. But the younger generation is far less likely to follow in their footsteps.

One person added, “Maybe it’s because I’ve lived here all my life and I don’t know anything different, but it really doesn’t feel that hard to be gay here. You just have to be a little discreet.”

There was that word again: “discreet.”

As Americans, we both heard all this and thought, “You shouldn’t have to be discreet! Having to change your behavior because of the opinions of others — or having to suffer consequences — that’s literally what discrimination is.”

The attitudes of these men feel to us a little bit like attitudes in gay America thirty years ago (which we’re, uh, barely old enough to remember). In most Western nations, being gay is about more than what you do in bed — it’s about a public identity. It’s a natural, normal, non-sexual part of who you are, and you shouldn’t have to hide it.

But at this point, it’s important to take a very large step backward. When someone living in what seems to us to be a very homophobic country says, “I’m not oppressed,” that feels wrong. We’re tempted to say, “Yes, you are oppressed, you just don’t know it yet!”

So we’ve tried hard to understand the point of view of these LGBTQ Georgians.

And the fact is, many are happy with their lives. They love their friends and family — even if those same people might not fully understand or accept all of their identity.

From the point of view of these men, these relationships are more important than, say, the ability to hold hands on the street or bring a date home for a family dinner.

Being so quick to accept the status quo might not be the choice we’d make, but then again, we’re only living in Georgia for three months.

That said, there really might be something to the idea that these men don’t really know things any other way.

One gay Georgian man in his early thirties told us he’d lived with his straight brother his whole life, and that they were really close. But his brother didn’t know our friend was gay. Our friend even had a boyfriend for five years, but his brother never met him.

When we said that seemed a little sad, our friend said, “I guess maybe it is.” It was almost as if the idea of coming out to his brother had never even occurred to him.

Then again, maybe he didn’t want to have to choose between his love for his brother and his being more fully out.

“I’m sure he already knows,” our friend said, pointing out he’s in his mid-thirties and never dated a woman, and he sometimes spends nights away from their apartment. His brother isn’t stupid. “But we’ve never talked about it.”

Even men who are less traditionally masculine — more stereotypically gay — don’t face the scrutiny that they might in the U.S.

“I got teased a little in high school,” one such man, 24, told us. “But I don’t think anyone really believed it. That wasn’t really part of life back then. There wasn’t the awareness.”

Things are different now, thanks to the internet and other media. Women are far more accepting than men, especially in big cities.

“But things haven’t changed that much,” the man says.

It’s gratifying that these men say they’re happy with their lives, even the gay part, despite the fact that Georgia is a pretty homophobic country. We don’t want to see anyone in pain. We were also gratified to hear that none of these men seemed to feel much shame over being gay.

And coming to Georgia has also been interesting for us, because it’s made us question some of our assumptions about oppression and the people who live under it: sometimes these things are complicated.

We’d forgotten that sometimes the status quo can feel comfortable — more comfortable than the backlash that can come from pushing for change, even if that change is better for everyone in the long run.

In the end, we’re also glad we listened to these men — really listened — without judgment. After all, it’s not for us to say how other people choose to live their lives.

By listening to them, they changed our thinking a bit.

And who knows? Maybe their listening to us will cause them to change their thinking about a few things too.