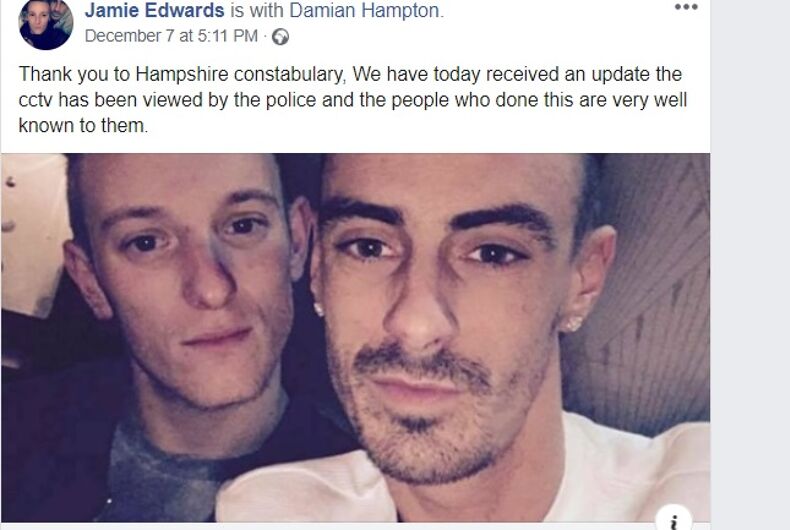 A gay couple that was beaten up while leaving a store is speaking out.

Jamie Edwards, 33, and Damian Hampton, 26, said that they were leaving a corner store this past Wednesday, December 4, in Southampton in southern England, when they were attacked by a group of teenagers.

Related: This man was the victim of a hate crime. So he ran over the attacker with his car.

The couple went to their local One Stop shop, as they do regularly, and as they were leaving, three teenagers started shouting homophobic insults at them.

They tried to walk away, but then they were attacked from behind.

The couple was “punched to the floor and kicked in the head” and then “booted in the face.”

“It happened so fast, within seconds they had caught up and punched Damian in the face,” Edwards told The Daily Echo. “They ripped my clothes and wouldn’t stop kicking us while we were on the ground.”

They couldn’t see the teenagers’ faces because they were wearing ski masks and hoodies.

“We had never even seen or spoke to them before, it was a totally unprovoked and unexpected attack,” Edwards said.

“I had to watch my boyfriend being booted on the floor and there was absolutely nothing I could do about it.”

The beating lasted for around four minutes before the teens ran off. The victims suffered arms, legs, and ribs, as well as cuts to their hands.

Edwards had to take several days off from work to recover from the attack and he is losing wages.

Both of the victims said that they will never go to that shop again because they’re too scared that they’ll get attacked again.

Hampshire Police confirmed that the attack occurred and said that it is being investigated as a hate crime.

Edwards wrote on Facebook that police have reviewed footage from a nearby security camera and told him that the alleged assailants are “very well known to them.”

Thank you to Hampshire constabulary, We have today received an update the cctv has been viewed by the police and the people who done this are very well known to them.