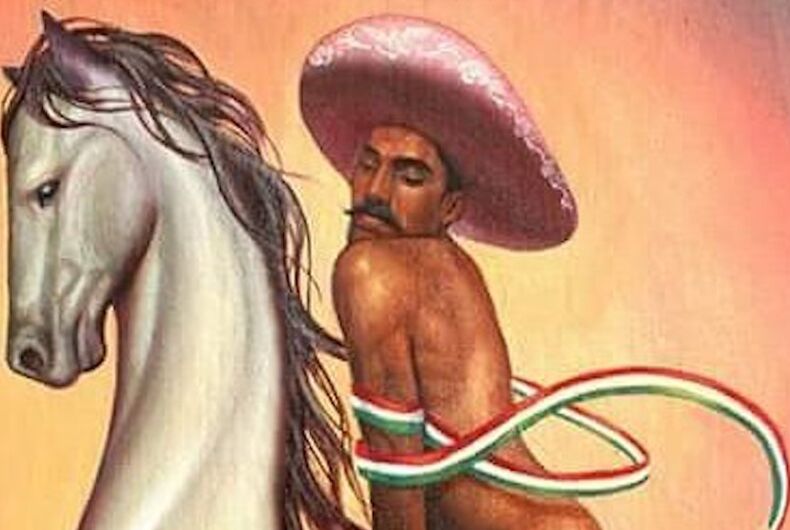 In Mexico City’s Fine Arts Palace, one of the country’s most prominent cultural centers, a small painting by 32-year-old queer artist Fabián Cháirez has caused traditionalist protestors to attack LGBTQ counter-protestors and others to call for the painting to be burned, compelling the Mexican government and President Andrés Manuel López Obrador to intervene.

The fight is over Cháirez’s “La Revolución,” a 12 x 8-inch portrait from 2014 that depicts one of the country’s most celebrated revolutionary heroes, Emiliano Zapata, as a pouty, naked pin-up. In the image, Zapata wears a pink sombrero and high heels shaped like pistols. He’s wrapped in a flowing ribbon colored like the Mexican flag while riding a horse with a giant erection.

Related: 17 men were busted pretending to be trans women to run for office in Mexico

Zapata is revered as an early 20th-century Mexican revolutionary leader who helped overthrow the “hacienda system” that kept poor farmers indebted to a small landowning class. As such, he’s become a symbol of social and economic justice for Mexico’s poor and working classes, according to WESA. He’s often depicted as a hyper-masculine figure with a bushy mustache and a sombrero.

Mexico’s Ministry of Culture of Mexico selected “La Revolución” as part of an exhibition entitled “Emiliano: Zapata after Zapata,” featuring 141 depictions of the revolutionary as an activist icon. But after Cháirez’s artwork was featured in the exhibit’s promotional materials, Zapata’s descendants pledged to sue the artist and the government for defamation, suggesting that he might be gay. (The real-life Zapata never married.)

On Wednesday morning, a fight occurred outside the palace between poorer Zapata-admiring farmers and LGBTQ activists. The farmers, who spouted anti-gay slurs and shouted “Burn it!” while blocking the Palace’s entrance, refused to move until the painting was taken down. After LGBTQ community members showed up to support the artwork, saying it challenges machismo stereotypes that endure to this day, the farmers began pushing and punching the counter-protesters.

Responding to growing unrest at the museum and in the media, Mexico’s President said at a press conference, “Artists have total freedom and we can’t have censorship. What is all this about entering the Fine Arts Palace and punching people? We totally reject this.”

The portrait is actually tame compared to Cháirez’s other NSFW pieces; most of it depicts naked Mexican wrestlers, vaqueros and clergy members seductively licking guns and crucifixes. Nevertheless, the Ministry of Culture says it has reached a deal with Zapata’s relatives, keeping the image in the exhibit but no longer featuring it in promotional materials.

In a recent interview, Cháirez said of the controversy, “A revolution is just that: moving ideas, moving established things to take them to another place, usually in favor of freedom and dignity. If Zapata were a contemporary person, he would surely be on our side.”

The queer community lost two heroes you may not know. You should.