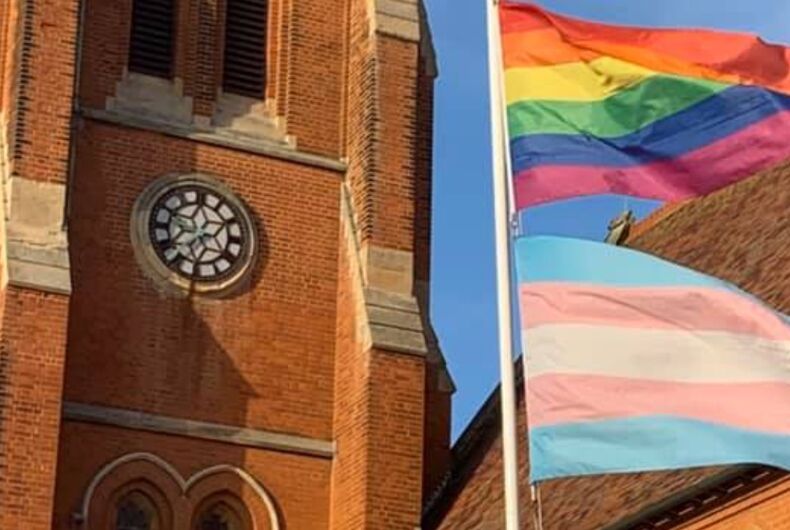 A note left at a LGBTQ-friendly church slammed them for proudly waving "worldly flags...of Satan."Photo: Twitter

Reverend Andrew Dotchin of the St. John the Baptist Church in Felixstowe, England found an anonymous note left on the altar after service this Sunday.

“The worldly flags of Satan you fly outside this building are not of GOD,” the note reads.

The ‘worldly’ flags referred to are the LGBTQ Pride flag and transgender flags that the church flies above its parish every Saturday. According to what the priest told the Ipswich Star, “One of my elderly parishioners said they were worried about the quote because it is not who we are at the church.”

So Rev. Dotchin took to the parish’s Facebook and Twitter to let everyone know his response. “1) Who put the colours in the rainbow[?] 2) We remain ‘Open to God, Open to All.'”

We had a note left in St John’s Church this morning which objected to the flags we fly outside.Our response is:1) Who put the colours in the rainbow 2) We remain ‘Open to God, Open to All

“I worry about people who hate for hate’s sake,” the reverend wrote. “Our logo at the church ‘Open for All’ was here before I got here and remains true today.” The Malta-born preacher says he “was heartened by the reaction on social media.”

Several messages came in showing support and appreciation for the church’s decision, with one person commenting that their LGBTQ-identifying son was excited by their post. “Thank you for making him feel like he can belong,” they wrote.

We had a note left in St John’s Church this morning which objected to the flags we fly outside.
Our response is:
1) Who put the colours in the rainbow?
2) we remain ‘Open to God, Open to All@inclusivechurch @1Body1Faith @Diverse_Church pic.twitter.com/2Gt48DVPor

Looks as if @FelixParish made the media. Thank you to everyone in @VisitFelixstowe who stands against prejudice & homophobia 💝
Rev says 'we are open to all ' after anti-LGBTQ note is left on altar | East Anglian Daily Times https://t.co/fun7tdLC4F

This holiday season, save the planet by ditching glitter