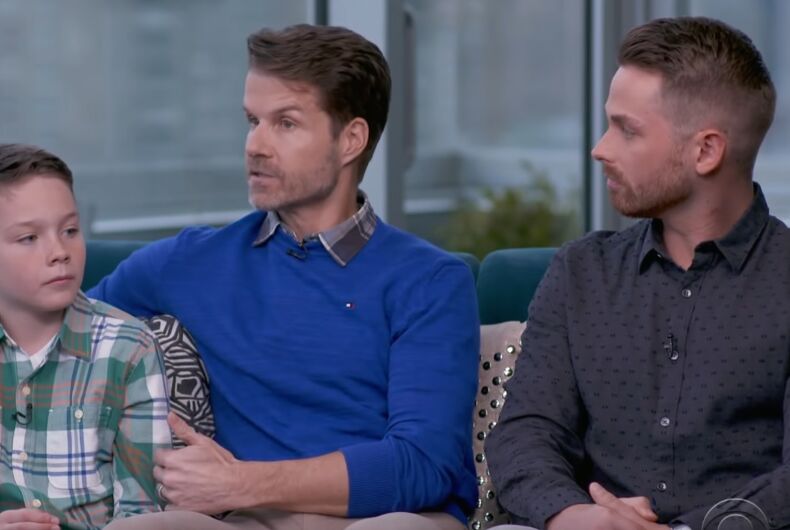 The Van Amstel family on CBS This MorningPhoto: Screenshot/CBS via YouTube

A boy who was told that “homosexuality is wrong” and “two men living together is a sin” when he said he was thankful for his two dads is telling his story.

Last month, a substitute teacher at Deerfield Elementary in Cedar Hills, Utah asked students what they were thankful for. Daniel van Amstel, 11, said that he was thankful for his two dads, which set the teacher off on a rant.

Related: Teacher who refused to use proper pronouns for trans students fired by school board

Daniel had been living with Louie and Josh van Amstel for several months and had not yet been adopted by the men, but he was still grateful for them.

“The teacher insulted my family,” Daniel told Tony Dokoupil on CBS This Morning. “She first said, ‘Why would you be happy you’d be adopted by them?'”

He said that he was afraid to respond – his adoption was pending and he didn’t want to get in trouble at school and perhaps jeopardize it, getting him put back in the foster system. He had already been through one failed adoption and had stayed with five foster families.

But some of the girls in the class stood up for him and challenged the teacher.

“Are you going to be gay?” Daniel said the teacher asked him.

“I have no idea,” he responded.

He said he “went red” in that moment because “it’s not nice to insult other families, even if you don’t like them.”

Dokoupil asked him what he would tell the teacher if he could, and he said: “You should have made better choices in life.”

The teacher was fired after some of the classmates complained to the school’s administration. Daniel said that “she could have done better” and that getting fired was “karma.”

His adoption was finalized this week.