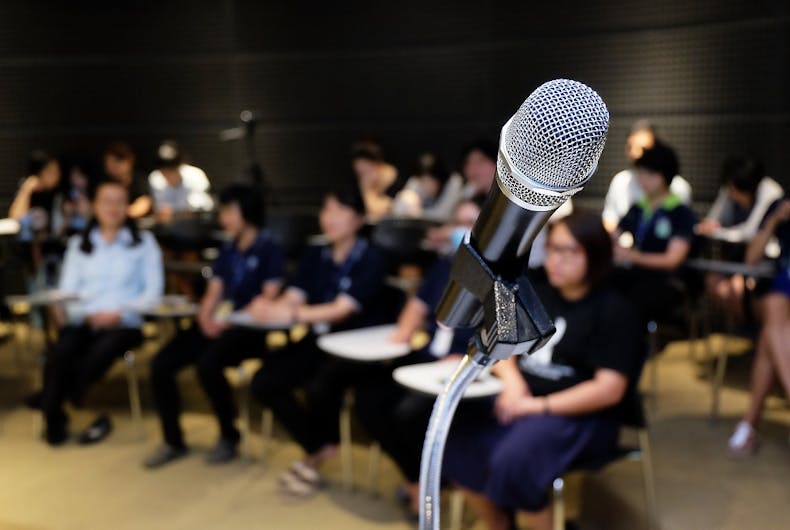 The school board of Flagler County, Florida apologized to an unnamed 15-year-old transgender boy after an “ex-lesbian” at a school board meeting called him “mentally ill” and a “confused girl.”

The woman – who described herself as a former “activist in the homosexual lifestyle” – made her comments after school board member Colleen Conklin voiced support for the teen, who came to the meeting with his father to request a revision of the district’s bullying and anti-harassment policies.

Related: Students would be allowed to sue if they see a trans person in the bathroom if new bill passes

Conklin praised Bertrand and his son: “I wanted to recognize both of you for being an example. And I hope and I pray that other parents who see that example find strength in that example, and that other students who are possibly struggling to share… find inspiration from you being so brave.”

But the ex-lesbian was having none of it. The woman said she was “deeply disappointed” by Conklin’s praise and baselessly claimed that 98% of children with gender dysphoria get over it. She also cited the “American College of Pediatricians,” which is a far-right transphobic activist group and not an actual medical group.

Conklin responded for the teen, “I am also not ‘confused,’ and I stand by my comments of applauding you and your family.”

The father, Randy Bertrand, brought his son to the school board meeting because he said a teacher at Matanzas High School in Palm Coast, Florida deliberately misgendered and dead-named his son, causing him to drop the teacher’s class.

While administrators at the high school said they’re investigating the claim, the school board told Bertrand that the district’s current policy says teachers should call students by the names and genders listed on their birth certificates until they receive a final court order verifying a legal name and gender change. Otherwise, the district has no other policies for handling trans students.

Bertrand asked the board to add explicit policies protecting LGBTQ students and handling teachers who refuse to recognize trans students’ identities, especially since the school district had already settled out-of-court in 2011 with a queer student who’d been mistreated by teachers and classmates. The board said it only revises its policies every three years and had done so most recently in January.

Bertrand told the board, “I realize that we may be meeting the standards set forth by the Florida Department of Education but I ask you to do more. Inclusion is including everybody. This is a very small group but it’s a very tender, fragile group.”