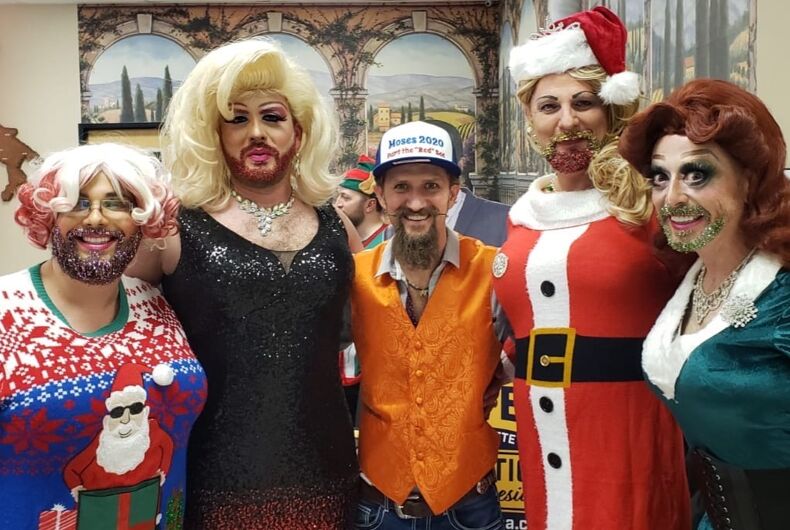 If democratic candidate Zachary Moses wins Utah’s next gubernatorial race, he will make history as the first openly bisexual man elected governor of the state and the second out bisexual person elected to a U.S. governorship.

But that’s not why Moses is running.

Related: Andrew Yang on how a “freedom dividend” will create a more accepting nation

“Getting in and identifying as queer would be a victory for the community,” he tells LGBTQ Nation, “But it’s one of those things that I feel like in a perfect world should be an irrelevant thing about a candidacy. We’re not campaigning on our personal orientation, though I do think it would be inspiring to a lot of people in the queer community to see a queer governor.”

Moses’ candidacy is certainly a long shot, though. Beyond the fact that he is a Democrat running in a heavily Republican state, he’s got some offbeat ideas, and he seems to be establishing himself as the quirky candidate. Take, for example, this song on his website that describes why he thinks Utah should no longer vote Republican.

But Moses, a Utah native, has big plans for the state. He wants to reestablish the value of public referendums. Utah has one of the strongest public referendum systems in the nation, he explains, but those in power have continued to ignore the will of the people on issues such as Medicaid expansion, anti-gerrymandering, and medical marijuana.

“Several of our legislatures literally said to citizens, don’t bother voting for this, your vote doesn’t matter because we’re the legislature and we’ll just overturn your referendum,” he told LGBTQ Nation.

Moses, whose campaign slogan is “Part the ‘Red’ Sea,” believes referendums are a crucial check on government power. He is a huge supporter of Utah’s Initiatives Protection Act, which would require legislatures to bring a vote to the public if they want to overturn or change an initiative that was publicly voted on.

Climate change is another urgent matter for Moses, who wants to work to improve Utah’s air quality issues and protect the shrinking Great Salt Lake.

“We’re talking about terraforming Mars,” he says. “Why don’t we come and terraform our desert back into the oasis it was hundreds of years ago?”

Another goal for Moses is to build a spaceport in Utah. He knows how it sounds, he says, but urges people to hear him out. Within the next twenty years, he explained, every state is going to need a spaceport that will move both people and goods, and he wants Utah to be at the forefront of this burgeoning industry.

Right now, he says, space is already a $350 billion industry and is projected to become a $2.7 trillion industry by 2040. People like Elon Musk are currently working on plans to make point-to-point trips around the planet through space. This would enable travel from one place to another anywhere on earth in about thirty minutes.

“We want to be part of the next biggest industry,” Moses says. “We have a huge young population in Utah. We have a huge well-educated workforce. Everyone is coming here to get the minerals to build these spacecraft. Given our geology, our workforce, our ingenuity (we’re Silicon Slopes, already a new tech hub), there is absolutely no reason we should be manufacturing space parts that leave the state to other facilities. We need our own.”

Another priority for Moses is making Utah a safer place for queer youth. While the state just banned conversion therapy, Moses explains that it came from an internal health department ruling, rather than from the state legislature. So, it is still not illegal.

“There’s a lot of reasons I’m running,” Moses says, “But [this is] one of the biggest ones.”

For the past nine years, Moses has been CEO of an LGBTQ-focused travel company called HE Travel. But he doesn’t think his lack of political experience is a weakness.

“I don’t think we need the people in power who are currently in power,” he says. “They’re the ones with political experience, and what they’re doing with their political experience is concentrating wealth and power in a kind of fascist way, and we don’t want that in America.”

“You’re supposed to go serve your term and then get back to work. We don’t need career politicians. We need people who get in there, do what we need done, and then go back to what they were doing.”

To Moses, the most important experience he can have is being intricately part of the Utah community. He loves where he lives and loves building community, which is why every Sunday morning at his home, he hosts what he playfully calls the church of brunch, a brunch that is open to those in his community and a tradition he hopes to continue as governor.

“If we take the Governor’s mansion,” he says, “We want to open it up every Sunday and have people come in.”

Right now, Moses works to connect with the greater Utah community through a blog on his campaign website.

“I want people to know who I am,” he says. “You should be selecting your governor based on who you think would be the best example of how the community should be. So I want to have a blog and tell people stories of why I feel like I’m in any position to be their governor.”

Moses feels a strong kinship to the state of Utah and especially to the beauty of its diverse land. Working in tourism, he has traveled all over the world, but he says no matter where he goes or what he sees, it never compares to Utah.

“I’m in Namibia, Africa,” he told LGBTQ Nation, “and we’re standing on the petrified sand dunes looking at the elephants in the distance walking through the desert, and the guide says, ‘Look how beautiful it is. There’s nothing like this anywhere in the world.’ I’m looking around, and I’m like, ‘Well, except in Utah.”’

For evangelicals, supporting Trump is now an article of faith. Literally.