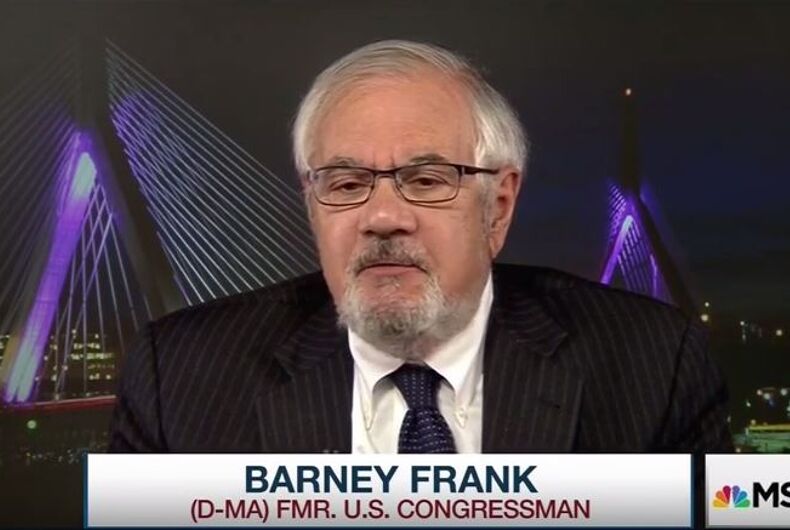 While Barney Frank is largely known as one of the first openly gay members of Congress, he’s also one of the savviest politicians around. In a more tolerant era, Frank would have risen to become Speaker of the House. Although he retired from Congress in 2012, Frank remains a sharp observer of the political scene.

So when Frank comes up with an idea for the 2020 elections, it’s worth listening to him. On a recent appearance on MSNBC, Frank revealed what he thinks is a strategy for Democrats to win a majority in the Senate. And it’s as too-the-point as you’d expect from Frank.

“I will tell you I have a slogan that I am suggesting to the Democratic candidates for the Senate all over the country,” Frank said. “‘You don’t have to live in Kentucky to vote against Mitch McConnell.’”

Frank’s slogan came up in the context of a debate about the impact of impeachment on Republicans. Frank said that Republicans will “pay a price” for trying to tilt the process to favor Trump once it reaches the Senate.

This is clever for two reasons – for one, it will motivate Democrats who are frustrated by McConnell’s willingness to violate political norms in order to push the Republican agenda. As the Senate Majority Leader, McConnell has used every tool in his power to ensure that Trump’s wishes are fulfilled. He used those same levers to block President Obama at every turn in hopes of making Obama a one-term president.

The second reason is that it puts a focus on the importance of the Senate. While it’s easy to think kicking Trump out of office will end the national nightmare, the fact is that Trump is just a symptom of the problem that is the Republican Party, not the disease. As long as Republicans maintain control of the Senate, a Democratic president will never be able to get much if anything accomplished.

For example, it would not be past McConnell to simply refuse to hold hearings about the president’s choice to replace Ruth Bader Ginsburg on the Supreme Court should she retire. He’s already shown he’s willing to hold the Court hostage to Republican desires by refusing to consider Merrick Garland. McConnell’s sole focus is on maintaining the GOP’s grip on power. If that means shredding norms, so be it.

We’ll see if Democrats adopt Frank’s slogan when they rev up the Senate campaigns next year. In the meantime, though, add it to “Moscow Mitch” as another sign that McConnell himself will be on the ballot everywhere.