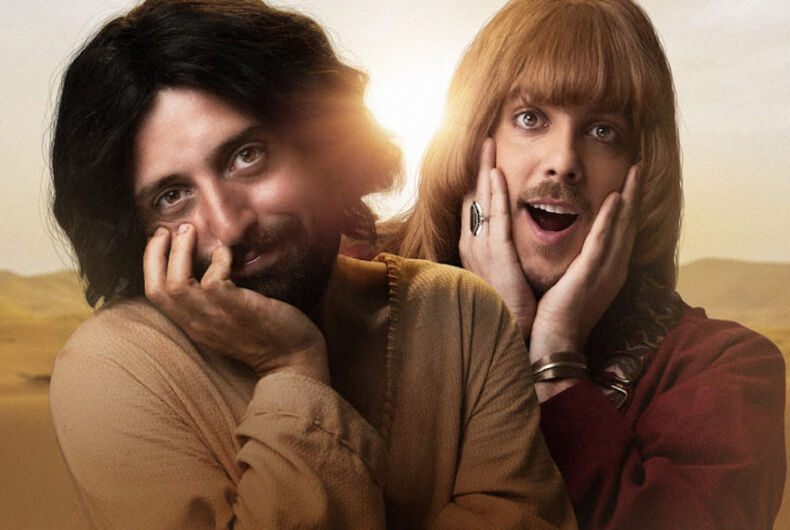 A comedic Netflix Christmas film in Brazil entitled The First Temptation of Christ (A Primeira Tentação de Cristo) has angered regional conservatives with its depiction of Jesus as a gay man who brings his boyfriend Orlando home to meet his parents, Mary and Joseph, during Jesus’ 30th birthday celebration.

A web user named Alex Brindejoncy has since launched a petition against the film which has collected over 1,132,673 signatures by the time of publication. The petition is addressed to Netflix; Back Door (Porta dos Fundos), the five-person comedy troupe that created the film; and both houses of the Brazilian legislature.

The film itself seems light-hearted and fantastical. Orlando (who refers to Jesus as “Jee”) sings a parody of “Jingle Bells” on an electronic keyboard.

Later, a very seductive God visits Jesus to scandalously reveal that he’s actually Jesus’ father (and not Joseph). Jesus will have to choose between living a happy gay life with Orlando or fulfilling his destiny of dying for all of humanity’s sins.

Luckily, some stoned deities and magic powers will help him along his way.

Here is a trailer for A Primeira Tentação de Cristo. It has no subtitles, but you can watch a subtitled version on Netflix.

While many of the commenters on the petition have called the film blasphemous and offensive, one called the film “a criminal offense under Brazilian criminal law [as] the practice of discrimination and prejudice based on race, ethnicity, color, RELIGION or national origin is an offense.”

One defender of the film wrote on Twitter that Back Door’s 2018 Christmas special, The Last Hangover, followed Jesus and his disciples the morning after the Last Supper. In it, he writes, “Jesus was portrayed as a sadistic, homicidal, hedonistic drunkard who hated to pray and no one cared. Now that he’s harmless and gay, the world has fallen. It’s atrophying the brain.”

Brazil’s conservative Christians have become more vocal following the 2018 presidential election of Jair Bolsonaro, a man who is staunchly opposed to LGBTQ equality. Bolsonaro has said that he would never love his son if he came out as gay, that he would never have a gay son because his family has “a good education,” and he promised to ban any references to LGBTQ people at school saying that it’s a threat to the country’s Christian values.