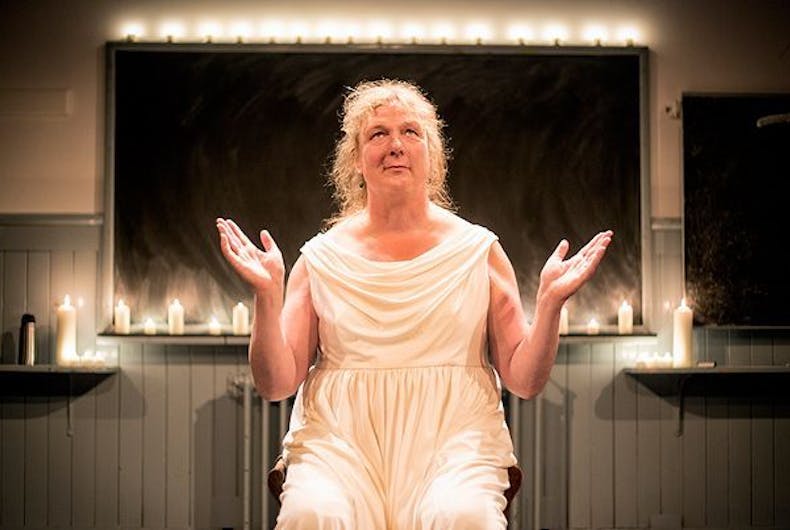 A play by trans playwright Jo Clifford named The Gospel According to Jesus, Queen of Heaven is attracting the worst kind of attention due to its portrayal of Jesus as a transgender woman.

A one-woman show, the play doesn’t aim to mock Jesus. On the contrary, the playwright’s idea is to help people see the gospel anew. She considers the play an “homage” to Jesus, not an insult.

“The archbishop of Glasgow said it was hard to imagine a greater affront to the Christian church than me,” Clifford told BBC Scotland. “I was very shocked and very distressed by that.”

Hundreds of protestors showed up to a 2009 performance of the play in Glasgow, and the show was dogged by incidents during its recent run in Brazil where, according to Clifford, everyone involved in the production received death threats.

Related: A student threatened to bomb his high school to ‘cleanse’ it of LGBT kids

The final performance in Brazil also faced actions by both local police and protestors.

“The last festival they [protested] at, armed police turned up and started to dismantle the theatre while the show was still going on, and someone threw a smoke bomb into the auditorium,” Clifford said.

In spite of the protests, the play has also received accolades from its audiences.

“Every time I go to Brazil, I meet people, particularly trans people, who tell me with tears in their eyes that this show has really changed their lives,” said Clifford. “It has changed the way they think about themselves.”

Figures such as Jesus have long been reframed in roles that are meant to draw attention to the plight of the downtrodden, including the Homeless Jesus statue by Timothy Schmalz (above). And, this holiday season, an Episcopalian church in Indianapolis caged Mary, Joseph and Baby Jesus to protest the US government’s cruel policies of detaining families at the southern border.

“I know what the Bible said … we’re supposed to love our neighbors as ourselves.” -Father Stephen Carlson of @CCCathedralIndy pic.twitter.com/iVAlUl6gvs

Possibly the best known reimagining of Jesus came from gay playwright Terrence McNally’s 1998 play Corpus Christi. In it, Jesus and his apostles are portrayed as gay men.

In moves that echo protests against The Gospel According to Jesus, Queen of Heaven, the Catholic League condemned Corpus Christi as blasphemy. McNally also received death threats when the play was staged in the U.S. Its initial U.S. run was temporarily halted over threats of violence.

The play, The Gospel According to Jesus, Queen of Heaven, has returned in Scotland for a limited run in Edinburgh until the 22nd of December.