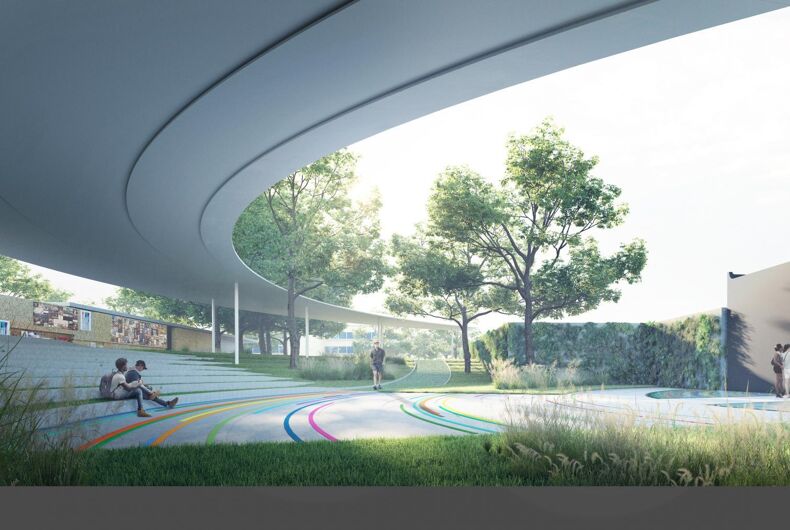 A concept for a memorial of the Pulse nightclub mass shooting by Coldefy & AssociésPhoto: OnePULSE Foundation

Related: How one undocuqueer is helping his community heal from a national tragedy

onePULSE made it clear that the design will still be subject to changes, “the winning team’s concept design serves as a starting point for discussion and a basis for the design but is not the final, finished memorial and museum.”

We're thrilled to announce that @Coldefy_CAAU with RDAI | HHCP has been selected to design the National Pulse Memorial & Museum. Over the next year, they'll work together to refine the designs to best reflect community feedback. #WeWillNotLetHateWin https://t.co/Na3TzBv0HG

The foundation considered 68 submissions from 19 countries and 2,300 different comments from loved ones of the 49 slain people. The planned memorial will feature a reflection pool, 49 trees, scupltures, a promenade, and a traced path between the former nightclub and the hospital closest to it the night of the shooting, Orlando Regional Medical Center.

In their announcement, onePulse also announced its intention to create a fund where every donation “will be used for the construction and operation of the National memorial and museum, educational programs and 49 Legacy Scholarships.”

Complementing the National Pulse Memorial, a museum and educational center will pay tribute to all those affected by the Pulse tragedy and serve as an important place for dialogue and education acting as a catalyst for positive change. It will be central to realizing onePULSE Foundation’s credo that “We will not let hate win.”

Additionally, the Orlando Health Survivors Walk will trace the three-block journey many victims and first responders took the night of the tragedy to get to Orlando Regional Medical Center and extend north to the Dr. Phillips Center for the Performing Arts.