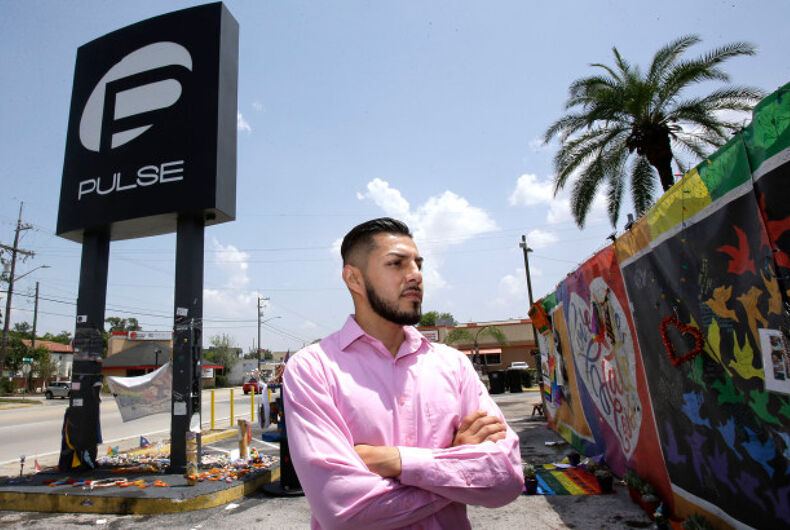 On his first day of school, Marco Quiroga’s mom told him he could not talk about his immigration status.

After moving to the United States when he was two, he and his sister, together with their mom, had experienced family homelessness, living out of their car in parking lots, all while his mother worked multiple jobs. But she was determined to provide a better life for her kids and eventually they reached stability.

The risk of disobeying her orders that first school day was clear: revealing his status could mean losing everything and being deported.

It was one of the first of many instances in which his immigration status would affect his talent for organizing and his passion for justice.

“When I was in kindergarten, my mom sat me down and said to me: lawyer or doctor,” said Quiroga. “At the time, ER was on and I was into it, so I chose doctor.”

Getting into undergraduate school first, though, would prove to be a challenge because of his status. Despite being at the top of his class, school after school would notice his missing social security number, cash his application fee, and essentially throw away his application.

“It was a demoralizing time because I felt like all the hard work I had done to show my mom that her sacrifices were meaningful, that I put into school, that it was really devalued,” said Quiroga.

Eventually he found Florida Gulf Coast University, which had a partnership through a grant to work with migrant farmworker communities. Through this, Marco was able to attend the school, which specializes in natural sciences.

He would stay on the medical school track, and ultimately received a degree in biochemistry. Later, however, his immigration status would again become an obstacle to gaining access to medical school.

As a student he had became highly involved on his campus and through this work discovered his passion and heart was working with nonprofits and social justice causes. Marco’s immigration status may have curtailed his medical school dreams, but it was also his status that was the catalyst for setting him on his current career path.

After graduating college, unsure of what would come next, Marco began meeting undocumented Latinas and other queer undocumented leaders in Florida who introduced him to the movement. Eventually he joined the Florida Immigrant Youth Network, going around the state to build community and capacity for other undocumented youth to begin organizing. Soon he found himself working on fighting for the DREAM Act in 2010, which introduced him to activists all over the country.

“This time opened up so many opportunities, so many more than I ever realized,” Quiroga told LGBTQ Nation.

While the DREAM Act ultimately failed in the Senate, Marco’s work in the immigration movement would continue. Soon after he joined the United We Dream Network, a national organization led by undocumented youth, which had been deeply involved in the DREAM Act fight. There he began building spaces of belonging and the leadership of other undocuqueer youth, working at the nexus of his multiple identities as a queer, Latinx, and undocumented youth of color.

Later, his efforts led him to serve as the national field director for Immigration Equality, a national LGBTQ immigrant rights organization, and would eventually move him from Orlando to Washington D.C. to work on LGBTQ-inclusive immigration reform and then New York City to work on building the leadership skills of queer and trans asylum-seekers and detainees.

But, it was the Pulse shooting in his hometown of Orlando that would abruptly change his trajectory.

In 2016, Marco was living in New York, directing field operations for Immigration Equality when he received the news about the shooting targeting LGBTQ Latinx youth and other people of color at his beloved Pulse Nightclub on Latin Night. Two days later, he was on a plane back to Orlando, and never looked back.

“When Pulse happened, it shattered that foundation I had built for myself,” said Quiroga. “When I lived on the streets, Pulse was a place where I found sanctuary. It was where I first used a fake ID to find the community I was lacking, where I took my sister when she started becoming more affirming. It impacted me because that place was a sanctuary, and it had been taken away from me.”

Today Marco plays an integral role in Orlando, where he serves as the director of the Contigo Fund, a grassroots and community-driven grant making organization that was borne in response to the tragedy.

“A coalition of foundations came together to do a needs assessment of the community, which would become the Contigo Fund,“ said Quiroga.

The organization, according to its site, “offers financial support to organizations working to heal, educate, and empower LGBTQ and Latinx individuals, immigrants, and people of color, as well as those working to end all form of bigotry in Central Florida.”

Advocates in the LGBTQ and immigration movements were familiar with his strongly intersectional work and it was agreed that he made a natural fit to serve as the new fund’s director. Since then, Contigo has raised and awarded over $1.3 million, supporting over 30 grassroots organizations.

“It just became really clear to me that this was the community that had given me the skills and empowerment that led me to be where I’m at,” said Quiroga. “If I didn’t pay that back, then I wouldn’t be completing my mission in life which is to create a better community for all of us.”

Marco had experienced homelessness with his family as a child, but he first experienced it on his own when he was seventeen. He had come to terms with his sexual orientation as a child, but as he got older, he was afraid the news would disappoint his mother who had worked so hard to build a life for them in the United States. After his sister caught him and a boyfriend together, and scared that she would tell their mom, he bolted and lived on the streets of Orlando for nine months.

“It was the last thing I ever wanted to do because she had sacrificed for me to be in this country,” he said.

Marco stayed with friends when he could, but unable to access shelters because of his lack of a proper ID, he usually slept on the streets.

It was a friend who finally intervened and called his mother to let him know where he was. When she picked him up, he learned that his sister had not in fact told their mother his truth.

“There was lots of crying, but she told me that no matter what, I was her son and that I did not belong on the streets,” said Quiroga. He eventually returned home and began living his life openly, and that openness would soon extend to his immigration status when in college he finally came out of the undocumented closet, as well.

“I would say that there are days when it’s hard to get out of bed right now, especially for folks who are of the undocumented experience,” said Quiroga “We are being told that we’re responsible for all the ills of our nation, we’re the reason we can’t progress, but it’s also an act of resilience and resistance to wake up and get out of bed.”

“The more that all of us are actualized, activated and resist, the more we are causing a change in the right direction,” said Quiroga. “We might not see the light immediately in front of us, but we are walking towards it.”