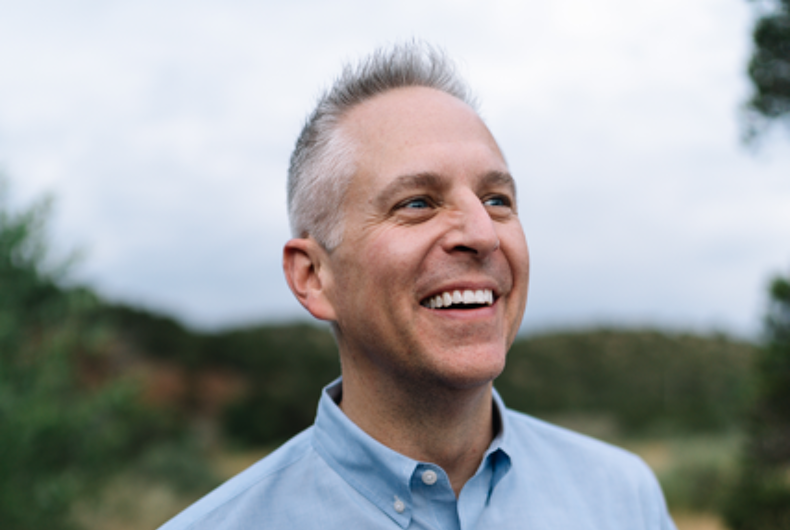 John Blair, a Democratic congressional candidate for New Mexico’s third district, is running for Congress to take on the Trump Administration, as well as the Republicans who support it.

“We’ve got Republicans in Congress caring more about NRA lobbyists than kids getting shot at schools,” Blair says. “We’ve got Big Pharma making profits while people can’t afford prescription drugs [and are falling victim to] the opioid epidemic. We’ve got a President and Administration pretending the climate crisis doesn’t exist.

“I felt compelled to jump in and push back on that and try to right some of those wrongs.”

Blair boasts quite an impressive resume. Early in his career, he worked for New Mexico Supreme Court Justice Edward Chávez. Since, he has worked for former Senator Jeff Bingaman, then-Rep. Martin Heinrich, and as the Department of the Interior’s Director of Intergovernmental and External Affairs during the Obama Administration. He then served as New Mexico’s Deputy Secretary of State under Maggie Toulouse Oliver, his most recent position.

A third generation New Mexican, Blair describes his district (which encompasses the northern part of the state) as “a magical place.”

“We’ve got a really proud tradition of Hispanic culture and citizens who can trace their heritage back over 400 years to the Conquistadores,” he says. “We’re very proud that Santa Fe was a functioning city before anybody landed at Jamestown. We have multiple Native American tribes, Pueblo Indians, Apache tribes, Navajo Nation. So there is really just a great diversity to the district, which is part of what those of us who are from here are proud of.”

The Democratic Primary for New Mexico’s 3rd District will take place on June 2nd, 2020. The incumbent, Ben Ray Lujàn, is currently aiming for the U.S. Senate. Blair is running in a crowded and competitive Democratic race, but he believes he is the best person for the job.

“Right now,” he says, “We have a climate crisis…we have, frankly, a constitutional crisis, we have an opioid epidemic, we have an epidemic of gun violence, I think we are frankly on the verge of an infrastructure crisis, and I think because of the experience I have had, I am best positioned to represent this district and jump in with both feet.”

In my home state of New Mexico, workers are building fencing along almost 50 miles of our state. This wall makes absolutely no sense. It takes federal funding from dollars that could go to other important social projects. It degrades our precious New Mexican land. And it is out of line with our American values. I will do everything I can to fight its construction.

While working at the Interior, Blair helped with the creation of the Paris Climate Accords and was on the team that helped make the Stonewall Inn the nation’s first LGBTQ National Monument.

In Congress, he plans to continue fighting to save the planet. “We are at the tipping point where if we get a few degrees warmer across the globe we will see catastrophic, irreparable harm,” he says. “We can’t turn back, so we need to act now.” According to Blair, New Mexico is a state with some of the most potential to conserve energy through solar and wind sources, and his district has the potential to be “the gold standard of the clean energy economy.”

With the right infrastructure, Blair believes the rural areas in his district could provide energy for cities like Phoenix, Denver, and Dallas. “What we need is to be incentivizing clean energy the [same] way the federal government has incentivized the fossil fuel industry for generations,” he tells us. Doing so would not only help the earth, but would also provide jobs for those living in the rural areas – a “win win win,” as Blair describes it.

In addition to climate change, Blair is intent on curbing gun violence. “It is appalling to me,” he says, “that here in Santa Fe public schools, before kids learn anything about science or math or English, they have to go through armed shooter training drills.”

His plans also include fighting to improve the lives of Native Americans. “Native American communities across the country have been left behind, and in many cases, they are examples of people who don’t have power, who don’t have running water in their homes…We’ve had some amazing New Mexico leaders who have been working, in some cases for decades, to try to make this better, and I feel it is a real necessity to continue making that fight.”

Most of all, Blair says that one of the most important things he can do as an elected official is communicate truthfully with his constituents. He says he will ensure the public “is getting actual facts and science and truth” and that “we’re actually having a legitimate conversation about what’s at stake.”

Happy Halloween! One of my favorite costumes was when I dressed up as a new version of Clark Kent: “SuperGay!” What are…

Posted by John Blair for New Mexico on Thursday, October 31, 2019

Blair is currently on the board of CasaQ, a nonprofit which provides housing options and other services for LGBTQ youth experiencing or at risk of homelessness. His biography names him as “a Kansas [University] basketball fanatic, political junkie and a Broadway show tunes aficionado.”

On October 24th, the Victory Fund, which works to elect LGBTQ candidates, announced its endorsement of Blair. The organization emphasizes that the Victory Fund team is highly selective and doesn’t endorse just anyone who is LGBTQ. “We do the research and vet the candidates to the best of our ability,” President/CEO Annise Parker says.

If elected, Blair – who lives in Santa Fe with his husband, Billy and dog, C.J. Cregg – will become New Mexico’s first openly LGBTQ Congressional representative. “That is very exciting for me,” he says, “and it was in fact one of the other motivators for me to run. When I was growing up in Santa Fe in the eighties, there were not any out LGBTQ officials in New Mexico.”

That has changed now, he says – but there need to be more.

“We know LGBTQ Americans are more likely to be living in poverty,” the former deputy secretary says. “We still don’t have full equality when it comes to housing. You name it, there’s much to be done. And so to be in a position to help bring that change is particularly meaningful to me and my family.”

Big news! Earlier today, @victoryfund endorsed my campaign, and I am ecstatic that they are joining our team! In case you haven’t heard of Victory Fund, it’s one of the most influential organizations aimed at reaching equality for LGBTQ Americans by changing the landscape of US politics. Victory Fund has supported some of the most influential LGBTQ candidates in politics and has helped these leaders achieve massive breakthroughs for LGBTQ Americans. Now Victory Fund is going to help me become New Mexico’s first LGBTQ member of Congress!