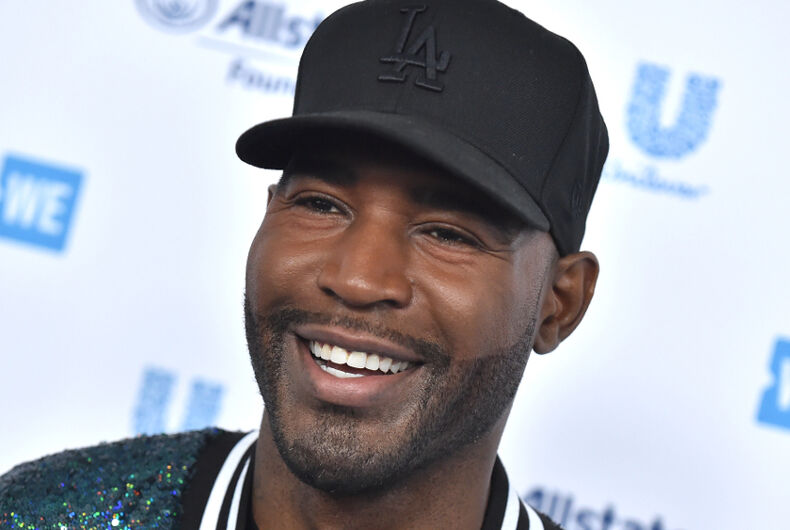 Karamo Brown, the “Culture Guy” from Netflix’s makeover series Queer Eye, has written a children’s book entitled I Am Perfectly Designed which features a variety of races and sexual orientations.

His pansexual son Jason helped him work on the book. Its title is based on Brown telling his sons that they were “perfectly designed” when growing up.

Related: 4 of the 5 “Queer Eye” guys met Alexandria Ocasio-Cortez while lobbying for the Equality Act

The book’s description on Amazon calls it an “empowering ode to modern families” in which “a boy and his father take a joyful walk through the city, discovering all the ways in which they are perfectly designed for each other.”

The book, which is intended for readers ages four to eight, was illustrated by Anoosha Syed, a Pakistani-Canadian illustrator whose work emphasizes diversity and inclusion.

The book is actually Brown’s second. Earlier this year, he released a memoir entitled Karamo: My Story of Embracing Purpose, Healing, and Hope in which he wrote about realizing he was a father 10 years after Jason’s birth, his time on the MTV reality show The Real World: Philadelphia and how he landed his role on Netflix’s Queer Eye.

Brown isn’t the first Queer Eye member to land a book deal. Earlier this year, Tan France, the show’s 36-year-old “Fashion Guy,” released Naturally Tan, a memoir which highlighted his run-ins with racism but omitted the story of his familial coming out.

Jonathan Van Ness, the flamboyant and comedic “Grooming Guy,” released his memoir Over the Top: A Raw Journey to Self Love which detailed his struggles with sexual abuse, an eating disorder, and a cocaine addiction.

More recently, Brown appeared as a contestant on Dancing with the Stars. He received backlash for referring to his co-contestant, former White House Press Secretary Sean Spicer, as “a good guy” and “really sweet.” He has since clarified that the two aren’t friends.

With last night’s election, a ‘rainbow wave’ of 144 LGBTQ candidates have won office this year