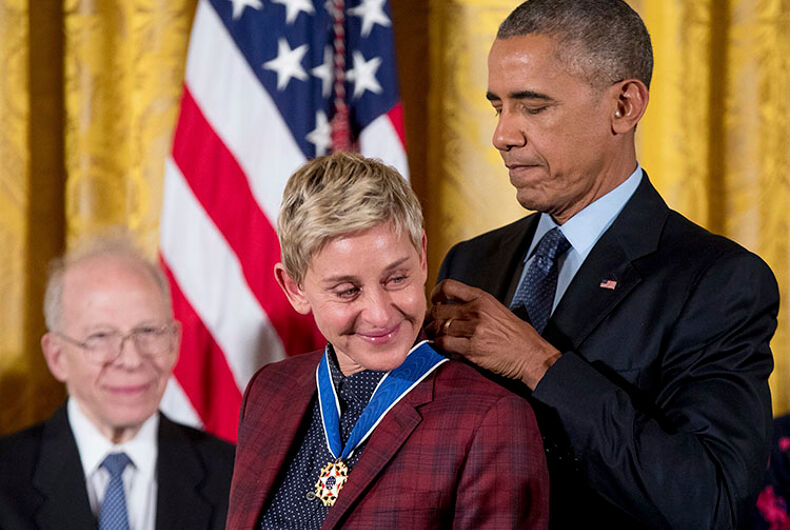 Ellen DeGeneres will receive the Carol Burnett Award next year at the Golden Globe Awards.

The Hollywood Foreign Press Association (HFPA) gives the Carol Burnett Award to one person each year to recognize their “outstanding contributions to television on or off the screen.” It’s the television equivalent of the Cecil B. deMille Award.

“From her sitcoms, to stand-up, to becoming a household staple on daytime television, she is a pioneer who has captivated audiences for nearly 25 years with her undeniable charm and wit,” said HFPA President Lorenzo Soria.

“In addition to her television success, she’s an advocate and philanthropist, lending her voice to those who don’t have one, and spreading kindness and joy through the power of her platform. We look forward to celebrating her achievements at this year’s ceremony.”

Ellen has been nominated three times for the Golden Globe for Best Actress in a Television Series Musical or Comedy in the 1990s for her sitcom, which she used as a platform for coming out in 1997.

Both her sitcom and her daytime talk show have been nominated for and won numerous Emmy Awards, and she has even won two Grammys for her comedy albums.

In 2016, Barack Obama gave her the Presidential Medal of Freedom.

The HFPA also mentioned the Ellen Fund, which raises money for endangered species.

The Carol Burnett Award was started this year and was given to Carol Burnett. Ellen will be the second recipient of the award.