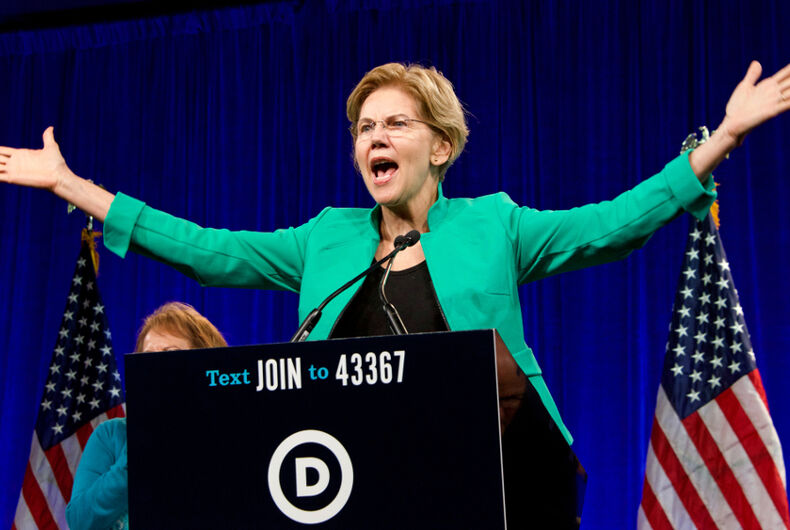 Warren made her pledge in a tweet and released additional details in a plan entitled “Keeping Our Promises to Our Service Members, Veterans, and Military Families” which she unveiled just before the upcoming November 11 Veteran’s Day holiday.

In addition to that pledge, Warren also said she planned on challenging the Pentagon’s policies of disallowing HIV-positive servicemembers to serve; to reinstate honorable discharges and veterans benefits for all LGBTQ servicemembers who were discharged under the “Don’t Ask, Don’t Tell”; and to include the LGBTQ population in the Department of Veterans Affairs’s Center for Minority Veterans, “ensuring that they receive targeted outreach and equal care and are treated with dignity and respect … including transition-related surgery.”

Her plan also pledges to help improve methods for addressing sexual assault in the military, to expand mental health services in hopes of reducing veteran suicides and addiction issues, and to reform the U.S Department of Veterans Affair so that veterans can access services that’ll help them and their families re-integrate into U.S. civilian life after serving.

She also plans on empowering the Consumer Financial Protection Bureau to go after “scammers” who target the pension benefits of low-income and older veterans in assisted care.

Here are her Tweets outlining some of her plans:

My administration will ease the transition of veterans leaving military service and help prepare them to return to civilian life. We’ll create a seamless transition from the DOD to the VA, eliminate the benefits backlog, and expand career opportunities for our vets.

Sen. Kamala Harris calls out the ‘trope’ that black people ‘are homophobic’