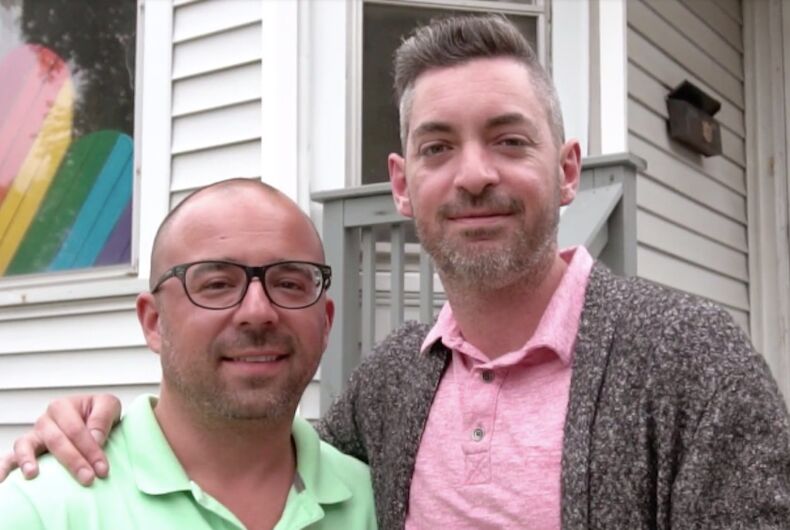 Brad and Nick Shlaikowski, a married couple, are the co-founders of Courage MKE, Wisconsin’s first-ever group home for homeless queer youth who would otherwise be sleeping in state-run homes or the streets.

The married couple have four children together: three from Brad’s previous marriage and Ivy, their adopted daughter who they began fostering in 2015. When the couple started caring for a foster-child named Annette, they realized how badly LGBTQ youth need housing options.

Annette had been kicked out by her biological parents’ home after coming out as lesbian and she didn’t feel welcome at women’s shelters. She’s just one among the 40% of homeless youth that identify as LGBTQ. LGBTQ youth are twice as likely than their straight counterparts to experience homelessness.

“Until we became foster parents, we had no idea how many kids in Milwaukee were not sleeping at their parents’ homes every night,” Brad told TODAY.

“I can’t fathom sleeping behind a dumpster when it’s negative 20 degrees outside,” he continued. “I want them to know that there’s a door they can knock on and get a hot meal and a shower and a soft pillow to sleep on.”

The couple decided to open up a home for homeless queer youth. After six months of house-hunting and fundraising, they finally purchased a house in February 2018.

Though they’d wanted the house to open in September 2018, it needed repairs and renovations delayed their plans. That same month, Lowe’s hardware store donated supplies and sent volunteers to help the couple begin construction.

Despite an enormous amount of construction help from over 100 volunteers, the couple had to become handymen themselves to finish projects like demolition, painting, and flooring when the volunteers were gone. The couple did this labor despite both of them working full-time jobs and being parents.

Furthermore, the couple needed money to actually pay for the house’s bills, its on-site employee, and other operating costs. At Courage MKE’s annual fundraiser gala in November 2018, Matthew Shepard’s parents came out to speak and help the organization raises just over its $70,000 goal.

The house finally got its approval from the city’s zoning board which allowed it to finally get licensing to open.

When queer teens in the foster system got wind of the Courage House opening, they immediately began e-mailing the couple. A licensing worker told Brad that they thought the home would be filled with kids the instant it opened its doors. Now that the home is operating, it’s filled to capacity with five young people.

At their city’s most recent Pride event, the Shlaikowskis received a $10,000 check that will allow them to open a second house for homeless queer youth. They’re currently seeking a place where more young LGBTQ people can call home.