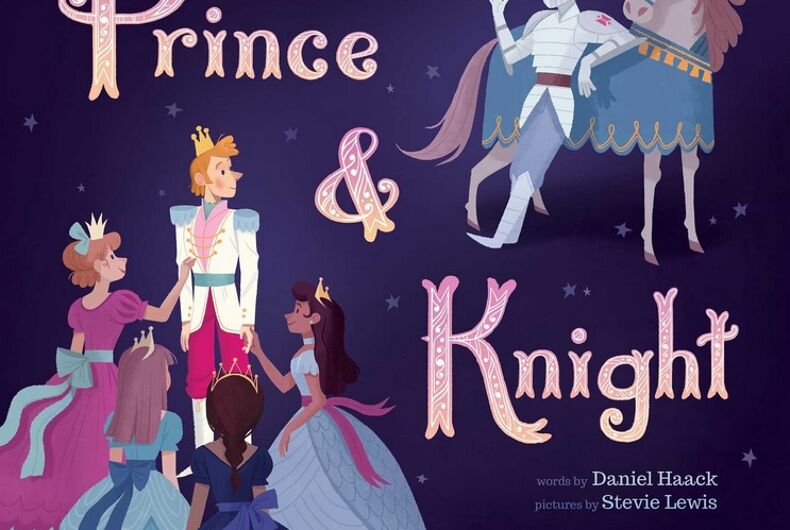 A library in West Virginia has been embroiled in conflict this week as some community members try to ban a gay children’s book while others defend it against censorship. The controversy led to the president of the library board storming out of a meeting as protestors wouldn’t allow them to get on with their business.

Earlier this week, the Upshur County Library removed the children’s book Prince & Knight from its shelves after conservative Christians complained about the book.

Related: Book with gay character confiscated in Palestine, writer might be arrested

Knight & Prince, by Daniel Haack, is about a king and queen who try to find their son a woman to marry, but he’s not interested in any of the women they have him meet, according to the Amazon description. A dragon attacks the town, and the prince and a male knight vanquish it and fall in love with each other. The king and queen are happy that their son found someone to love.

It sounds like a cute book for kids that involves a gay couple – a necessary antidote to the heterosexuality in almost every other children’s fairy tale.

But that’s not how Josh Layfield, the pastor of Calvary Chapel Mountain Highlands, sees it. After an elementary school student took the book home last week and a parent complained, Layfield wrote on Facebook that the book “is a deliberate attempt to indoctrinate young children, especially boys, into the LGBTQA lifestyle.”

Layfield wrote that the only reason his four sons turned out straight is that they never read children’s books with gay knights in them.

“As a father of four boys, I know my boys love princes, kings, and rulers,” he wrote. “They love knights in shining armor and they emulate these men by acting them out in play.”

“Unfortunately, this is an intentional leading of children into sin and parents and citizens within this community must be mindful with what is happening,” he added.

Layfield wrote that a library board meeting was scheduled for last night and encouraged people to attend the meeting.

The book was not on the meeting’s agenda and public comment would not be allowed at the meeting. But Upshur County Public Library Director Paul Norko also told local news site Mountaineer Journal that the book would be discussed.

And dozens of area residents – on both sides of the debate – showed up to the meeting and disrupted it.

After going through some normal business, Upshur County Public Library Board President Dennis Xander told people that the board was going into an executive session and “Ya’ll need to leave.”

The other board members laughed as residents who have never been to any board meetings before accused Xander of being a bad leader.

“I’m not doing this,” Xander said at the end of the meeting. “You guys can sit here all day, but I’m going home.”

The book will be reviewed by the board at a later date, and they will decide whether to put it back in the children’s section of the library, move it to an adult section, or ban it.

While residents are dissatisfied with how the meeting went, author Daniel Haack said that he’s “in awe” of the residents who have been standing up against censorship and homophobia.

I'm in AWE of Buckhannon Pride and all the parents and other community members across Upshur County, West Virginia, who are standing up in support of #PrinceAndKnight and against censorship and anti-LGBTQ discrimination! (via @NYDailyNews @MuriAssuncao)https://t.co/rtufYsQMIP

“The decision to remove Prince & Knight from the shelves of the Upshur County Public Library is an act of discrimination, plain and simple,” said GLAAD President and CEO Sarah Kate Ellis in a statement. “Inclusive children’s books do not ‘indoctrinate’ but do allow LGBTQ families and their children the chance to see themselves reflected in the world.”

Haack put it succinctly, responding to people who believe a book can actually make someone gay by reminding them of “all the gay adults who grew up only reading about straight romances.”