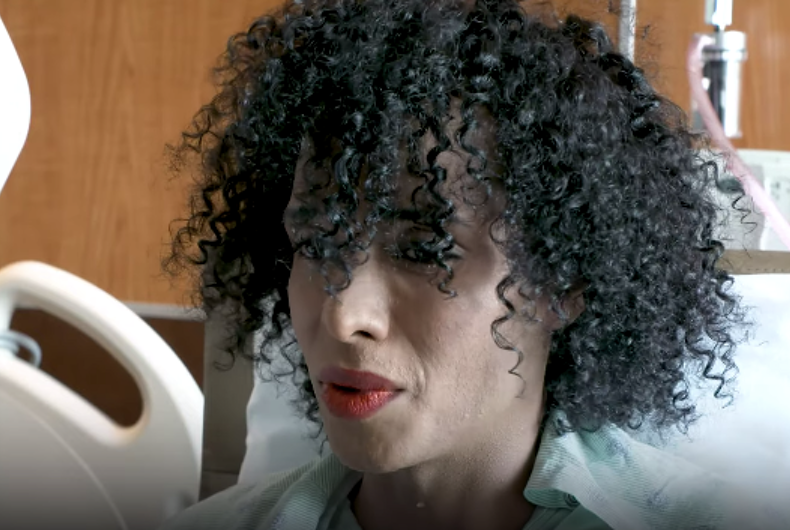 Daniela Calderon, the 25-year-old transgender Dallas woman gunned down in a cowardly Sept. 20 attack by 29-year-old cis man Domingo Ramirez-Cavente, shared her story and cried out for justice while recovering at the hospital. Meanwhile, police recently released her attacker on bail and now he’s back on the streets.

Calderon, an undocumented Honduras-born sex worker whose parents orphaned her at an early age, says her attacker lured her with $80 and a request of oral intercourse. Little did she know, he had “a pistol hidden in the cab of his truck,” writes The Dallas Morning News (DMN). The DMN continues:

I said, ‘I am a transgender woman.’

Then he tells me, ‘Oh you’re a man,’” Calderon remembers, gesturing with her red painted nails. “Call me whatever you want,” she told him, “but don’t disrespect me.”

The man said he’d changed his mind then, but for some reason kept pursuing her. Calderon says he lobbed homophobic and transphobic slurs at her: “Then he tells me, ‘Tonight you won’t live anymore. At any moment, they will kill you. … Are you afraid? Are you afraid of dying tonight?'”

She hid out at a nearby shop. When she thought he’d left, she stepped back outside. He then approached from behind and shot her “six times in the abdomen, hip, chest and arm,” the DMN writes.

Police found her laying in a pool of blood. They applied tourniquets and questioned her as EMTs put her on a gurney and took her to the hospital — she was conscious the entire time.

Here’s video of Calderon discussing her attack and showing her surgical scars at the hospital:

She now has little feeling in her right arm and difficulty gripping with that hand. She also walks with pained slowness, but hopes to recover. She wants to apply for her green card for refugees escaping violence in their home countries and dreams of becoming a chef’s assistant.

Propped up on a pillow in the hospital, Calderon talked about the unprovoked attack’s effect on her, adding that she never touched him …:

“I was a little afraid, but I never imagined it would happen to me. I feel an irreversible trauma, something that I wouldn’t wish on anyone, no one, absolutely no one. Why? Because I’ll be marked for the rest of my life….

He did it without remorse. He will do it again.”

“Who does justice serve, if by paying a bond a man can leave and this crime can go unpunished? Or, what if he had killed me? It’s unjust. In these moments, I feel courage, lots of frustration. That’s why I ask again for justice for me and for all transsexual women, because we have a right to live.”

The DMN notes, “At least 15 transgender people have been killed in Texas since 2015. Police have made arrests in 12 of these cases. Eight of the victims were in sexual relationships with their killers.”

Gay is the word: A history of LGBTQ bookstores around the world

Gay man threatened with his own sign at protest against hate