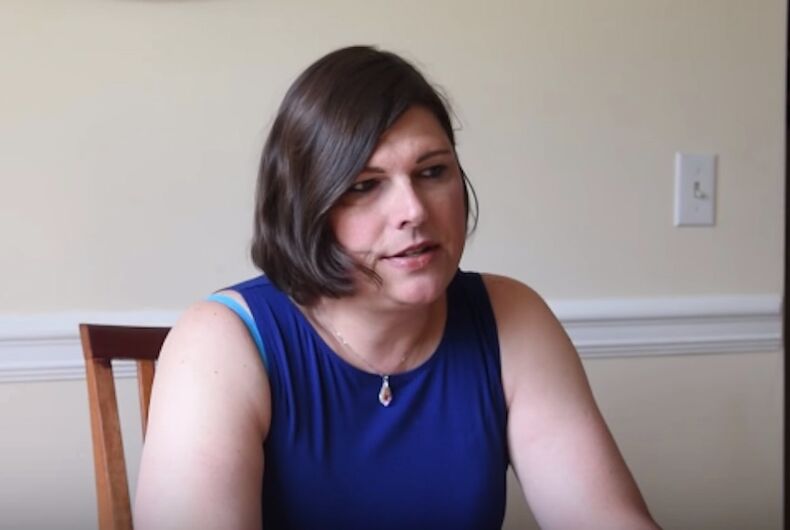 Anna Lange — a police sergeant in the small town of Perry, Georgia (population 16,684) — has filed a federal lawsuit against the Houston County Board of Commissioners for “refusing to allow her health insurance plan to cover her gender-affirmation surgery,” reports NPR.

Lange has worked in the Houston County Sheriff’s Office since 2006 and began hormone therapy to transition since coming out as trans in 2017. However, when she sought surgery, her insurance denied her claim, citing “an exclusion specified by her employer.”

Related: His insurance decided to revoke a trans man’s coverage while he was on the operating table

The exclusion came as a shock. After Lange was told by Anthem Blue Cross and Blue Shield that her insurance would cover gender-confirmation surgery — and had her New York City-based surgeon confirm it — she traveled to Manhattan last November for a consultation. Shortly after she returned, she received a letter informing her that her employer’s plan would not, in fact, cover her procedure.

Her lawyer, Noah Lewis of the Transgender Legal Defense and Education Fund, says the denial of coverage constitutes “unlawful discrimination” under Title VII of the 1964 Civil Rights Act and the Americans with Disabilities Act as well as other federal and state equal protection clauses.

NPR notes, “The Affordable Care Act, which took effect in 2014, specifically prohibits discrimination by health insurance issuers on the basis of gender identity.”

Despite this and several recent legal victories across the nation declaring trans insurance exclusions unlawful, many state and local governments continue to spend hundreds of thousands on costly legal battles defending such exclusions in the same of conservative political ideology — often spending far more than the health care itself itself would cost.

While many cases between trans employees and their exclusionary employers often get settled out of court, such settlements neither admit wrongdoing nor establish legal precedent to ensure medical care for other trans Americans.

John Knight, an attorney with the American Civil Liberties Union, said, “Given the small number of people who actually need this kind of care and the large pool of people, it will have absolutely no impact on the total cost of insurance for any state.”