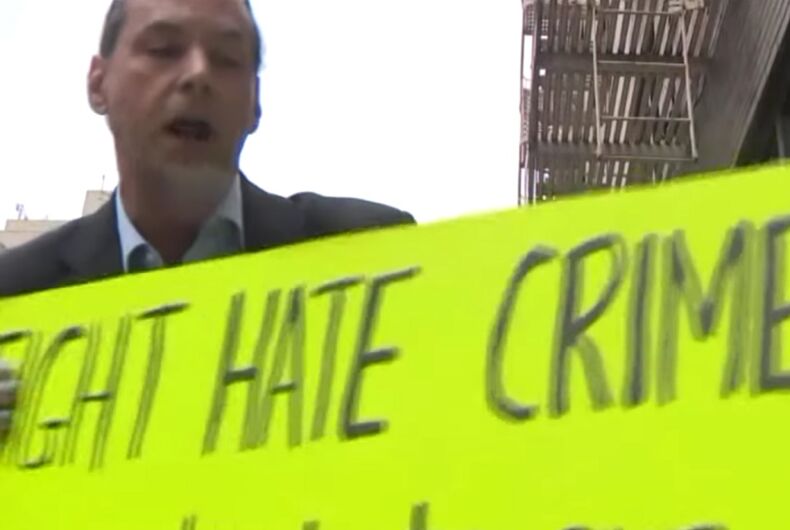 A gay man who dances against hate daily in New York City had his signs attacked by an anti-gay passerby.

Anthony Dolci dances and plays music to protest Donald Trump, racism, homophobia, and hate on Manhattan’s West Side. He has a number of signs with phrases like “I choose love not hate” and “Fight hate crime.”

He was protesting when a man started shouting at him and harassing him.

“He called me several bad language words towards my sexuality, being gay,” Dolci told PIX 11. “He picked up one of my protest signs and he broke it almost in two, then threw it at me, and hit me with my protest sign.”

Dolci caught some of the confrontation on video with his phone. The passerby can be seen grabbing a sign, folding it, and throwing it at Dolci without hitting him.

”It makes me sad,” he said. “This is very personal, this is who I am. I’m celebrating myself being gay, openly gay, and to be attacked by that, it’s very personal and it’s very hurtful.”

Dolci said that this isn’t the first time he has been called an anti-gay slur, but that he’s going to keep protesting to make the world safer for other LGBTQ people.

“I was in the closet for a long time and those days are done. I’m done with that. Now I’m openly gay and I’m not afraid of expressing myself and people should not feel threatened by my gayness,” he said.

The New York Police Department said that their Hate Crimes Unit is investigating the attack.