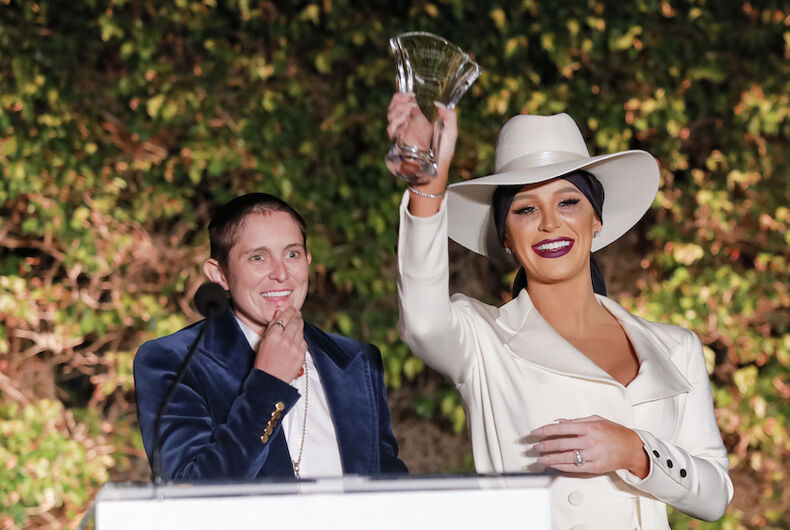 Family Equality recently welcomed over 400 guests to its 2019 L.A. Impact Awards honoring those who’ve made an impact fighting for legal rights and protections for LGBTQ families.

Among the honorees were Gigi Gorgeous Getty and Nats Getty. Gigi is a famous LGBTQ content creator with nearly 8 million followers and almost half a billion views on YouTube; Nats is a model, designer, artist and LGBTQ rights activist. The couple received Family Equality’s 2019 Murray-Reese Family Award because their work has created greater understanding of and empathy for the challenges faced by LGBTQ parents.

Related: Hundreds of LGBTQ families came together & OMG would you look at these photos of cute kids?!

The organization’s  2019 Corporate Impact Award went to the California Cryobank which has helped LGBTQ families have children since 1977. The Cryobank has also helped pioneer reproductive health access for transgender people and sponsored national and local LGBTQ events.

LGBTQ Nation was among the awards show’s sponsors.

“In any fight for equality, it’s important to stop and celebrate the progress we’ve made. This is what the LA Impact Awards are all about: recognizing those who have been instrumental in our mission. This year’s honorees have worked tirelessly to ensure that current and future LGBTQ+ families feel seen and supported. Gigi Gorgeous Getty and Nats Getty have courageously shared their family-building journey with an audience of more than 8 million—many of whom are young, LGBTQ+ individuals that will be forming families of their own.  California Cryobank has been at the forefront of LGBTQ+ family formation for decades, embracing our community before others in assisted reproductive technology were ready to step up.”

Here are some images from the awards show: